The office building E is the very last piece of development completing the northern part of the BB Center complex along Vyskocilova (street) and a ramp to 5.května (street). So, towards the city centre the bldg. E closes the planned “protection shield” against the negative impact of city highway traffic on residential houses planned for the second phase of development. This part of the Prague-Michle district has now been revitalized, reintroducing the urban environment with multiple functions and restoring it the way it was before the highway – 5.května street – completely destroyed it.

Location of the building within the first plan facing the highway protects the future development along Baarova (street), but at the same time calls for the necessity to eliminate noise reverberation to the opposite residential houses. The solution of this problem became (similar to the solution of the recently completed Gamma building) the basic architectural concept responding to physical principles of noise reverberation.

The approach to this problem is very individual resulting from the specific set-up of this particular building. A ´broken´ façade is designed facing the source of noise – 5. kvetna street and the access ramp – with strip fenestration. Its moulding was defined by the specific highway curve and the ramp from Vyskocilova (street) in order to prevent reverberation of noise generated by cars passing by towards the above-mentioned houses on the opposite side of the highway. The designed geometry allows areas of this special envelope to bounce noise away either to the grassed slope between the highway and the ramp naturally absorbing it, or diverting it at a large angle upwards and diffusing it in the open space high above. This way the façade system effectively deals with the so-called ´non-attenuable´ parts of the façade – i.e. glazed strips of windows and remaining solid panels that are incapable of noise attenuation due to their physical properties. The bigger part of the facade is made from sound-absorbing perforated steel plates.

The broken façade is a 3-D reinforced concrete wall with window openings between loadbearing pillars copying its geometry. To build it the contractor decided in the end to use a combination of prefabricated elements and casting in-situ. Façade windows are designed as fixed panels made of the façade modular structure; special trapezium profiles were produced for this particular purpose corresponding with the designed inclination of the façade. Glazing and fixing to the core and shell is dealt with so that acoustic comfort is also maintained in the interior – the assumed maximum level of acoustic pressure in each office is Laeq 45 dB. A particular type of glass for this façade was selected in respect of solar radiation – glass panes are used preventing an increase in the heat loading; exterior louvers complement glazed areas. These louvers can be controlled either individually or from the central control panel.

Solid façade sections are designed as thermally insulated with perforated sheet panels finished by metallic coloured powder coat set in front. Perforation (diameters and cc distances of holes) was again selected in cooperation with sound engineer. Sheets are screwed to structural grating that also drains water away from the façade. Due to perforation, a waterproof foil protects mineral acoustic and thermal insulation. Window frames with plinths and boxes for exterior louvers consist of exactly fabricated Larsen composite casing panels. he parapets and fronts of walls set in the face of the façade on both ends of the building are composed the same way.

A system of fixing eyes for anchorage of the façade cleaning and maintenance staff is designed within the façade system.

The acoustic facade forms a hypotenuse of a triangular concept of the building; the remaining two sides facing inwards to the area are designed as fully glazed with irregular horizontal articulation. The envelope is designed using a system modular façade; the additional areas on the ground floor and façade of the bay above the entrance are standard framing with additional cladding of solid areas by aluminium coated sheet and Larson composite panels.

The triangular footprint contains a similar triangular atrium letting light into the interior of the seven-storied structure. The atrium is at the same time a circulation and social centre of the building containing green, panoramic lifts and other refreshing elements. A glazed skylight roofs the whole atrium.

The building E also has areas allocated for relaxation and park areas, partly designed in front of the main entrance, partly in the form of a roof garden protected by a parapet of the acoustic façade. A fountain is installed as a landscaping element in front of the entrance.

The concept of the layout allows arranging the interior areas as open-space and at the same time as individual offices. The office areas, furnished and parted according to the particular tenant’s needs (CEZ Group), are complemented by other facilities – a kitchen with a staff canteen, a conference centre with a cafeteria on the ground floor, etc. The underground garage utilises the central shape of the building and it is designed as a four-storied helix without additional ramps.

The building E is equipped with sophisticated forced ventilation and cooling, the so-called exact cooling – VRV system. The building is fully sprinklered; gas fire extinguishing is designed for server rooms and IT workplaces. Lighting of offices is also up-to-date employing the system of mobile floor-tape luminaries allowing more even distribution of light and better a flexibility of office organisation. 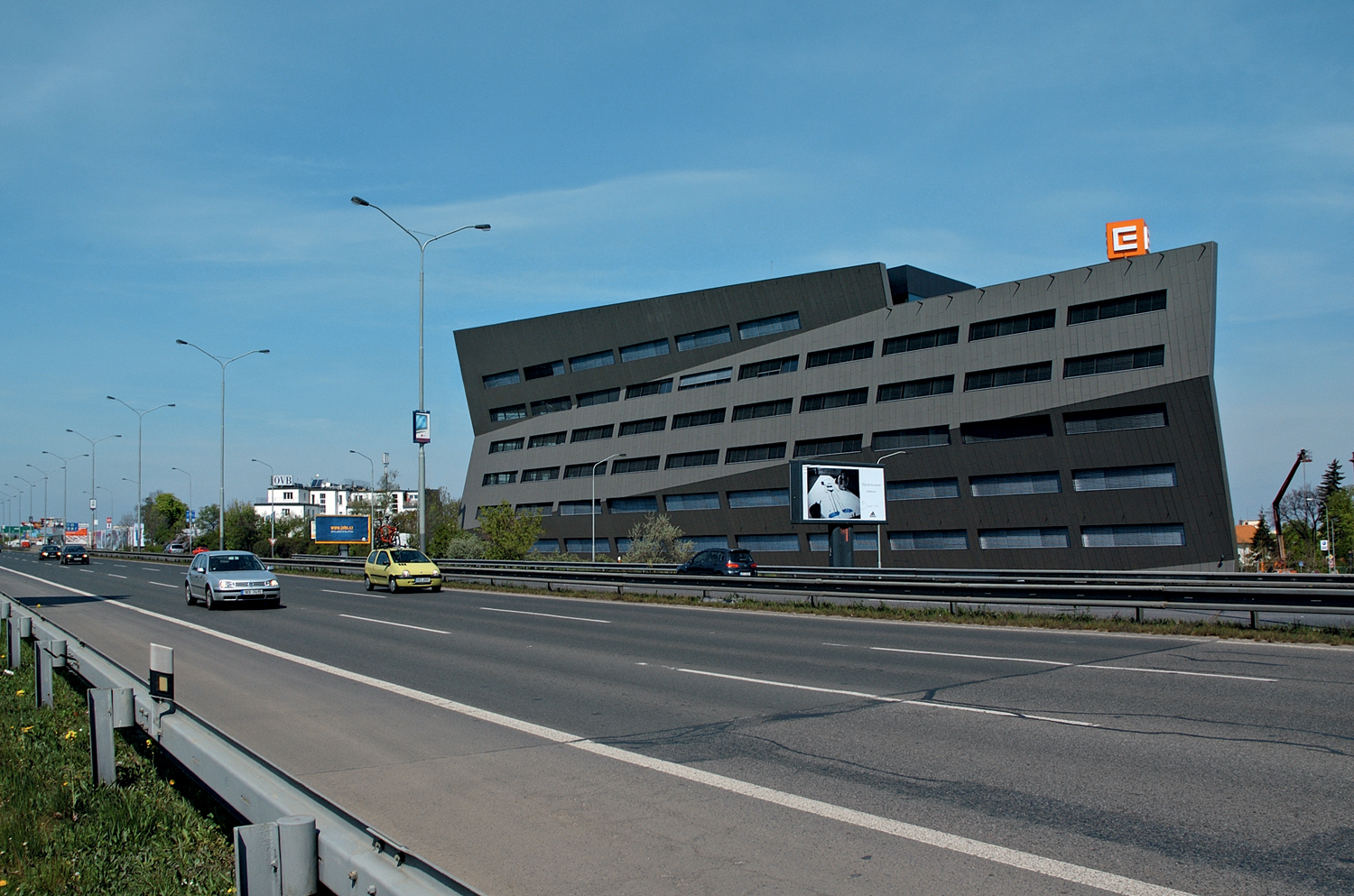 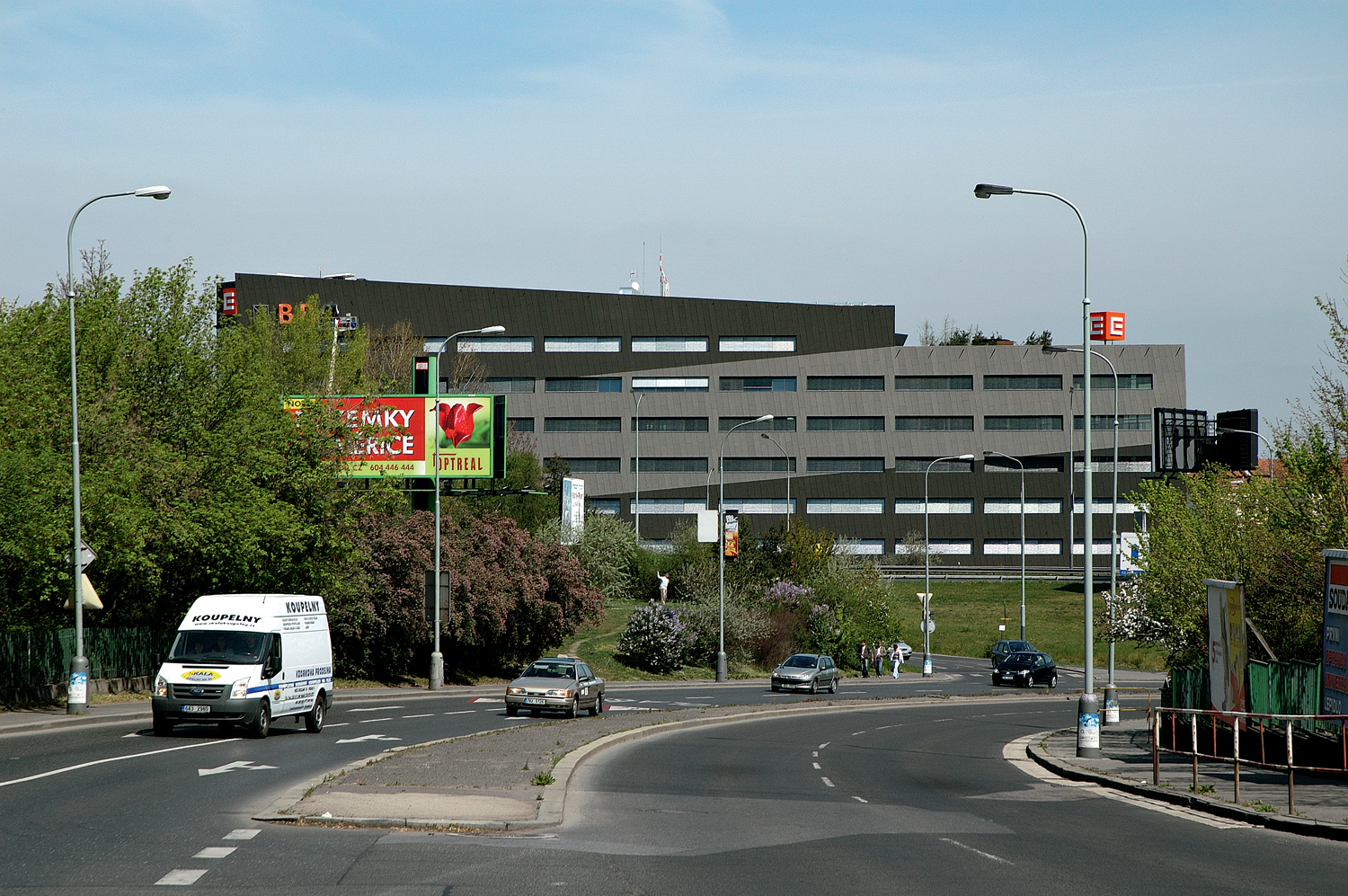 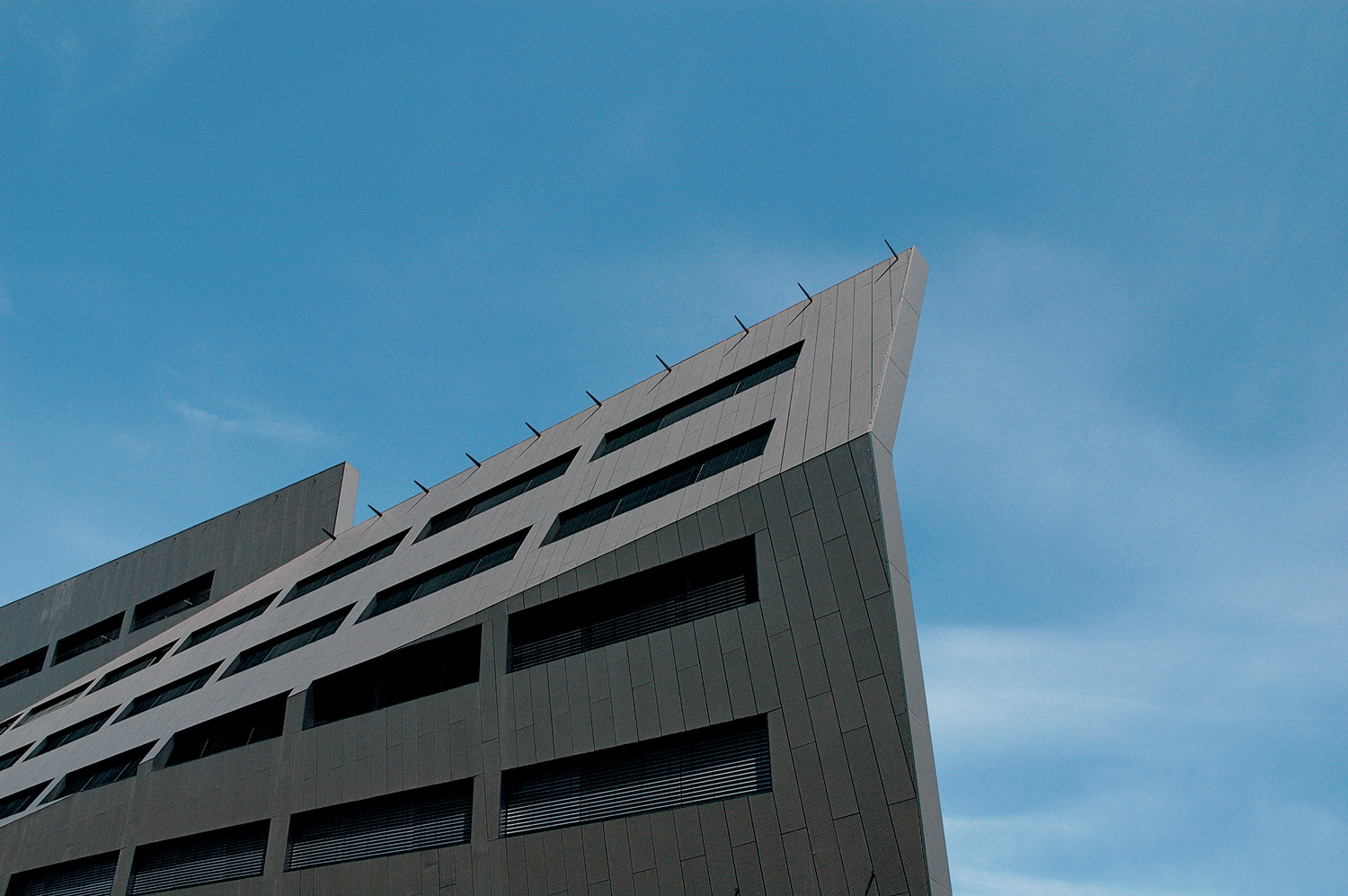 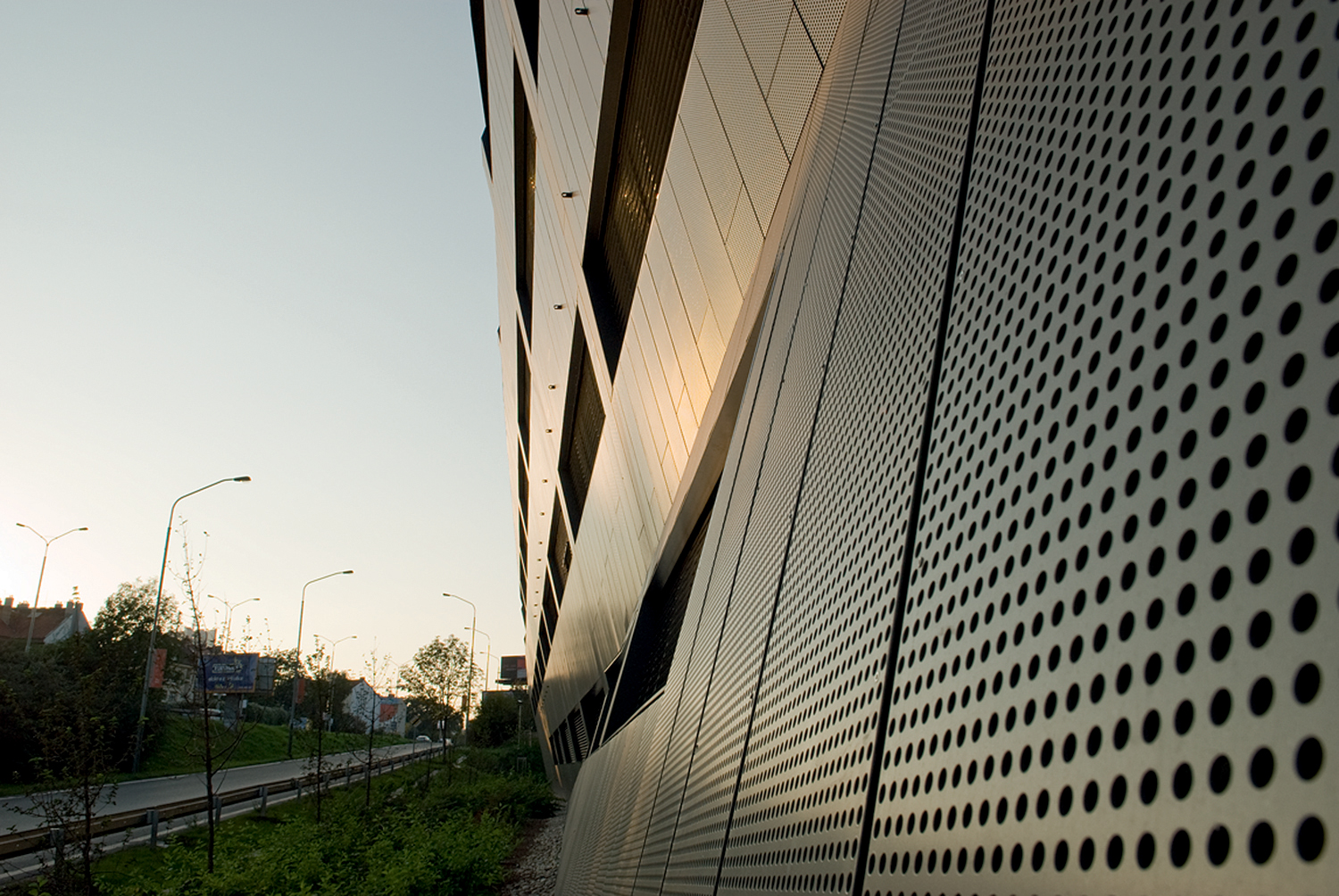 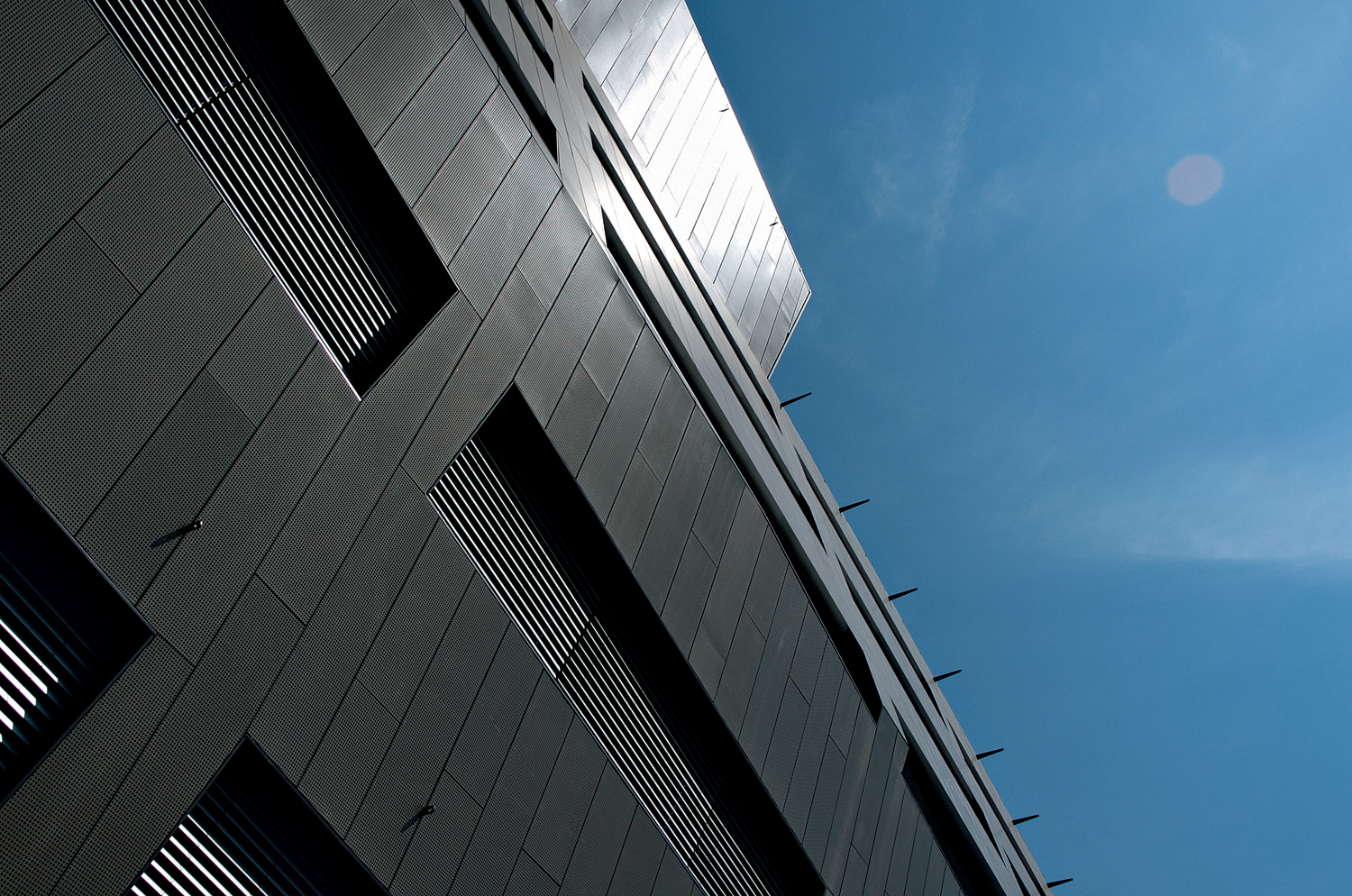 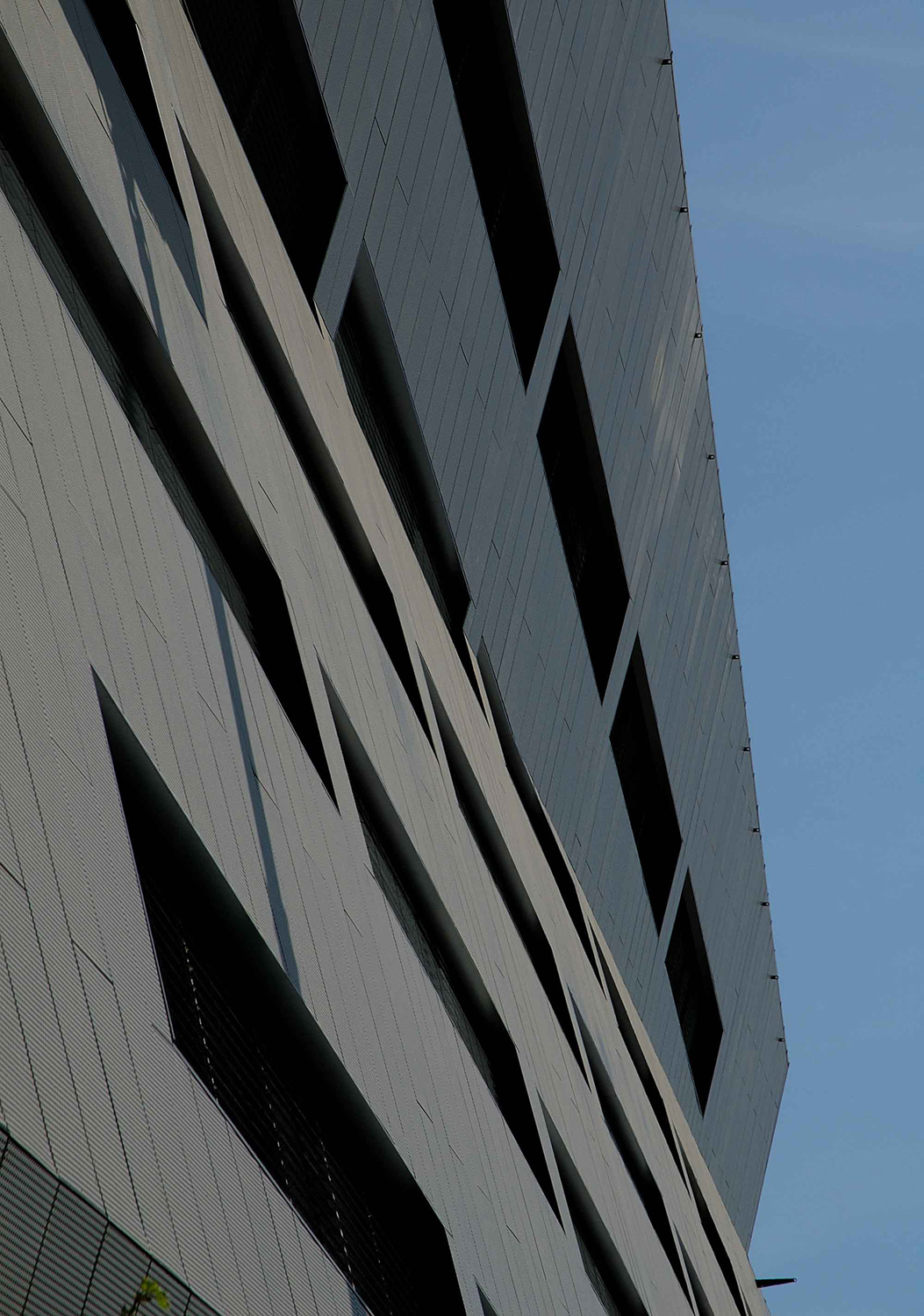 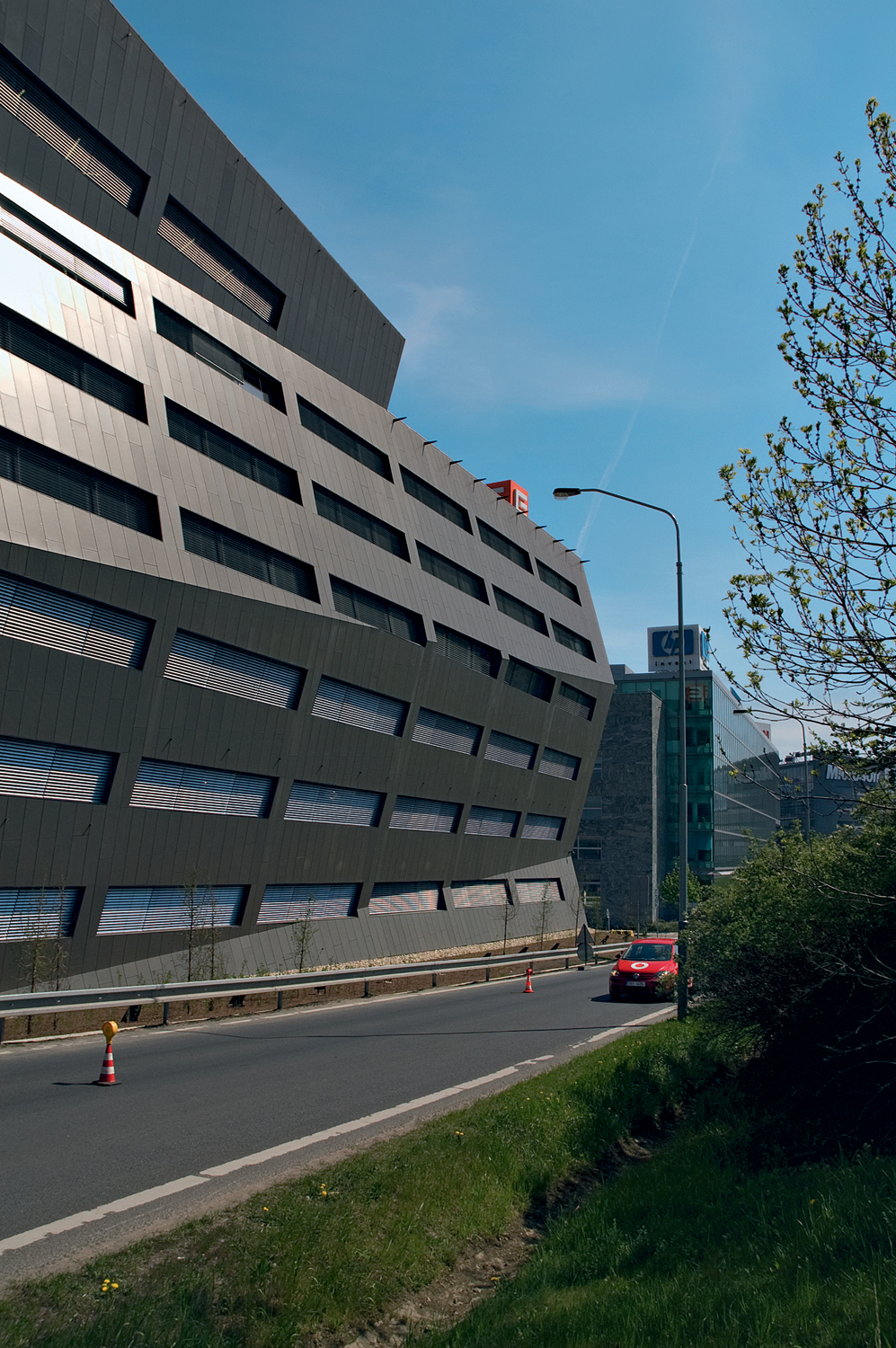 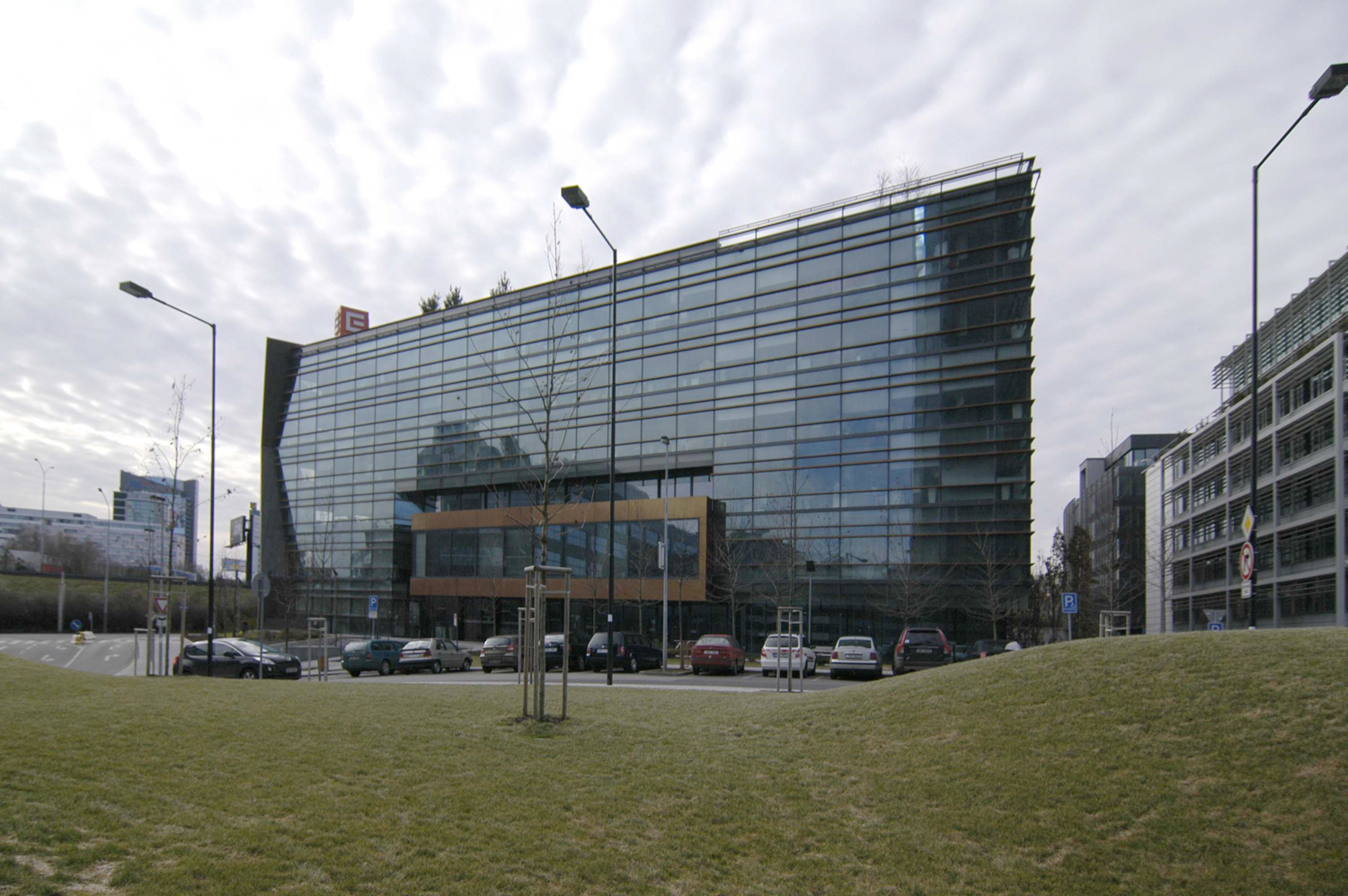 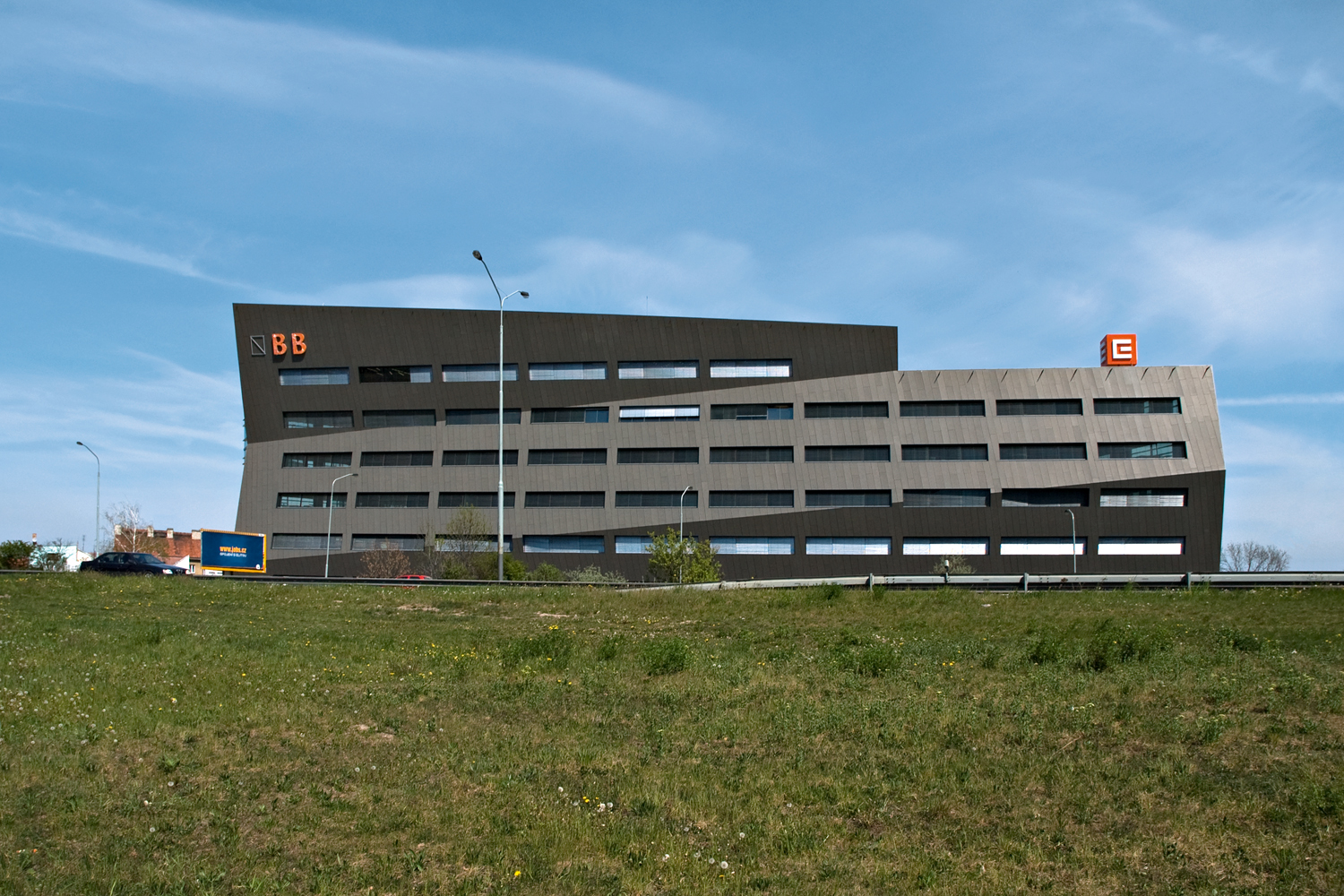 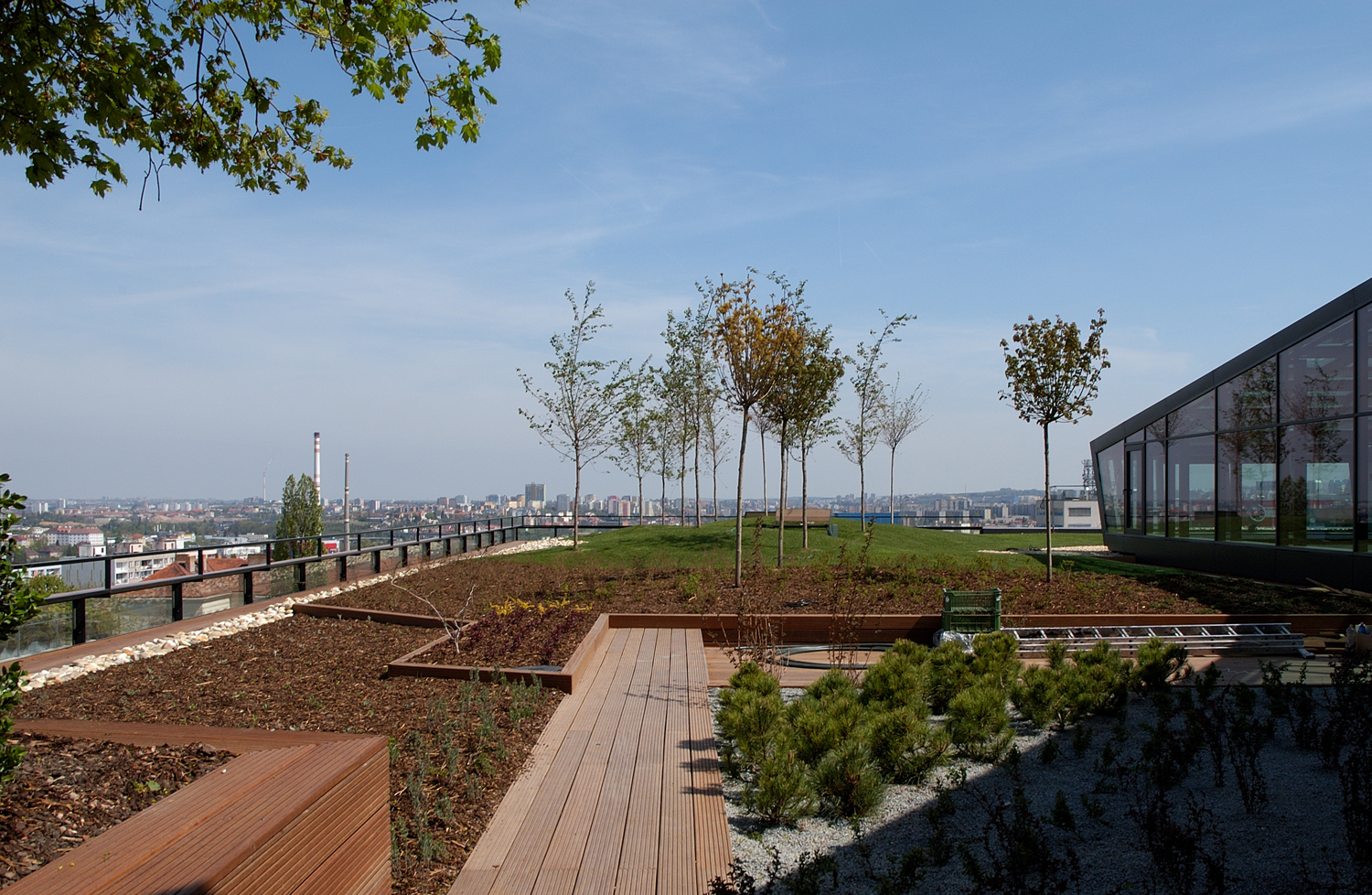 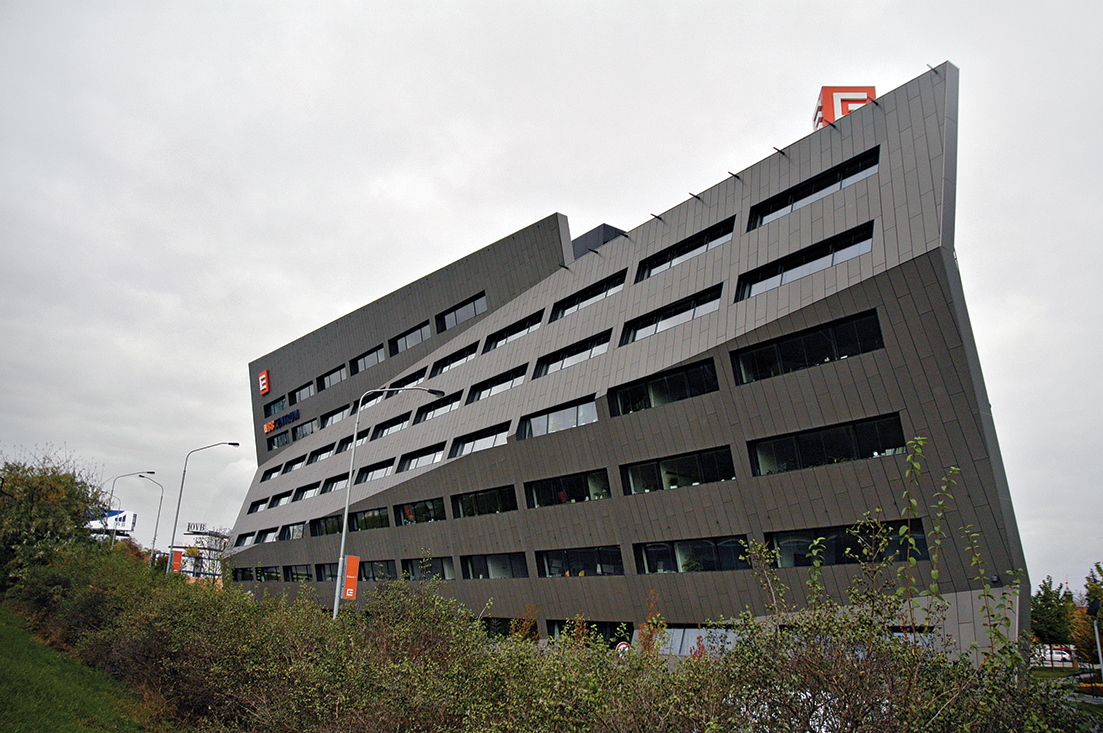 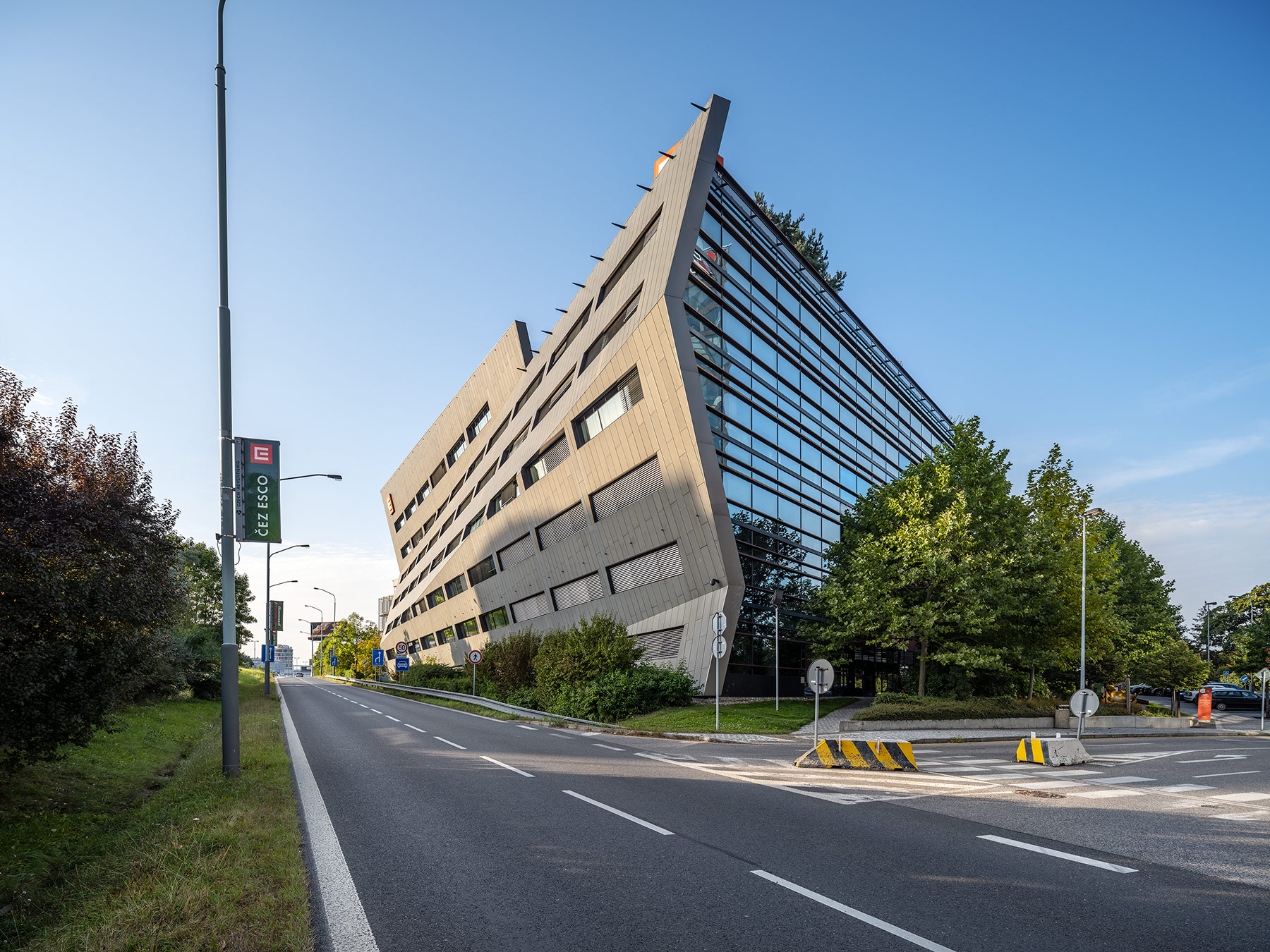 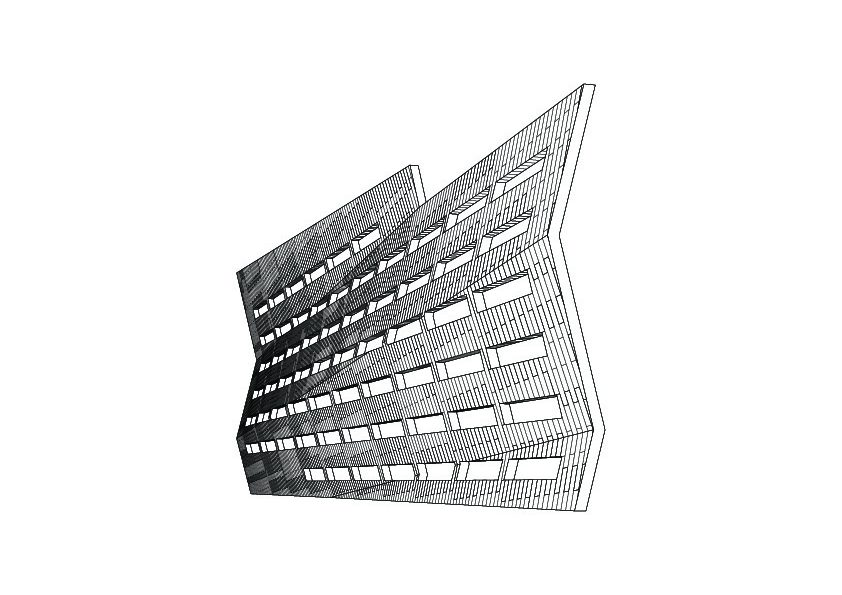