ALFA was designed and built in the same way as other buildings to the BB Centrum according to the urbanistic plan developed for this area in 1993. This plan defined – within the broader area enclosed by streets 5. května, Baarova and Michelská – the method of development for the town’s specific central ring close to a civil structure-highway. The urbanistic scheme is designed across the usual categories of a block and detached development. Volumes of houses are mutually geometrically fixed together establishing shapes of huge open blocks with an internal environment, greenery, and parking areas. The old Brumlovka sports hall has been preserved unchanged landscaped in order to include it towith the complex.
The concept of the ALFA buildingALFA is influenced by very busy streets – Vyskočilova and 5. května – more so than other buildings in the BB Centrum; 5. května street with an exit ramp of a highway character and at a sharp angle of crossing with Vyskočilova establishes a residual area, which is a typical feature of civil structures outside a city defined by the sharp intersection with Vykočilova (street) and two different levels of both roads. It was the need to define the building in terms of the highway, against its lines determining the building‘s outline the highway had neverhad reckoned with, thatwhich was so important in the course of searching for the form of the building. The turf on the highway‘s slope hiding a part of the building establishes a reducing element between the town and out-of-town environment. The ALFA buildingALFA is the smallest of all buildings in the BB Centrum complex. Its shorter side faces Vyskočilova whereis the main entrance from the street lies. The building has three basements and eight aboveground stories. The top story is partly the technical back-of-house; a terrace and roof garden are here, too.also here. The roof garden on Alpha is not just themerely a casual design solution for the percentage of greenery designed to satisfy authorities, but it really isis genuinely a place for staying among the somewhat funnyamusing conifers. The capacity of the building’s office part is readyprepared for approximately 960 people. The basements house an underground garage anda part of the technology rooms. The underground garage is designed as an inclining spiral forming a ramp for downward traffic.

We designed the central internal courtyard bringing daylight inside the building based on our former experience with the opposite bldg. “C” where we had partly lost this space due to poorly assessed ways of tenants’ reasoning (there were open circulation areas along the courtyard the tenants closed by additional glazing). The courtyard’s conical shape was selected in order to bring daylight to the lower stories.
The structural system is a reinforced concrete frame with just one specialtyone speciality – inclining columns allowingenabling the north façade to recede on each floor. This short façade forming the building’s portal features a more complicated fully glazed envelope; the other two façades with horizontal windows are simply clad in TiZn shinglesin fact using welts for jointing. Only forusing welts for jointing. For ending this cladding at façade corners more precise panels of the same material were used for bordering.
The architectural interior design focused on the entrance lobby, the courtyard with a coffee bar and a canteen and common areas featuring the individual designs and elements of the architects. Leased offices are absolutely universal open plan layouts intended for various arrangements by tenants. 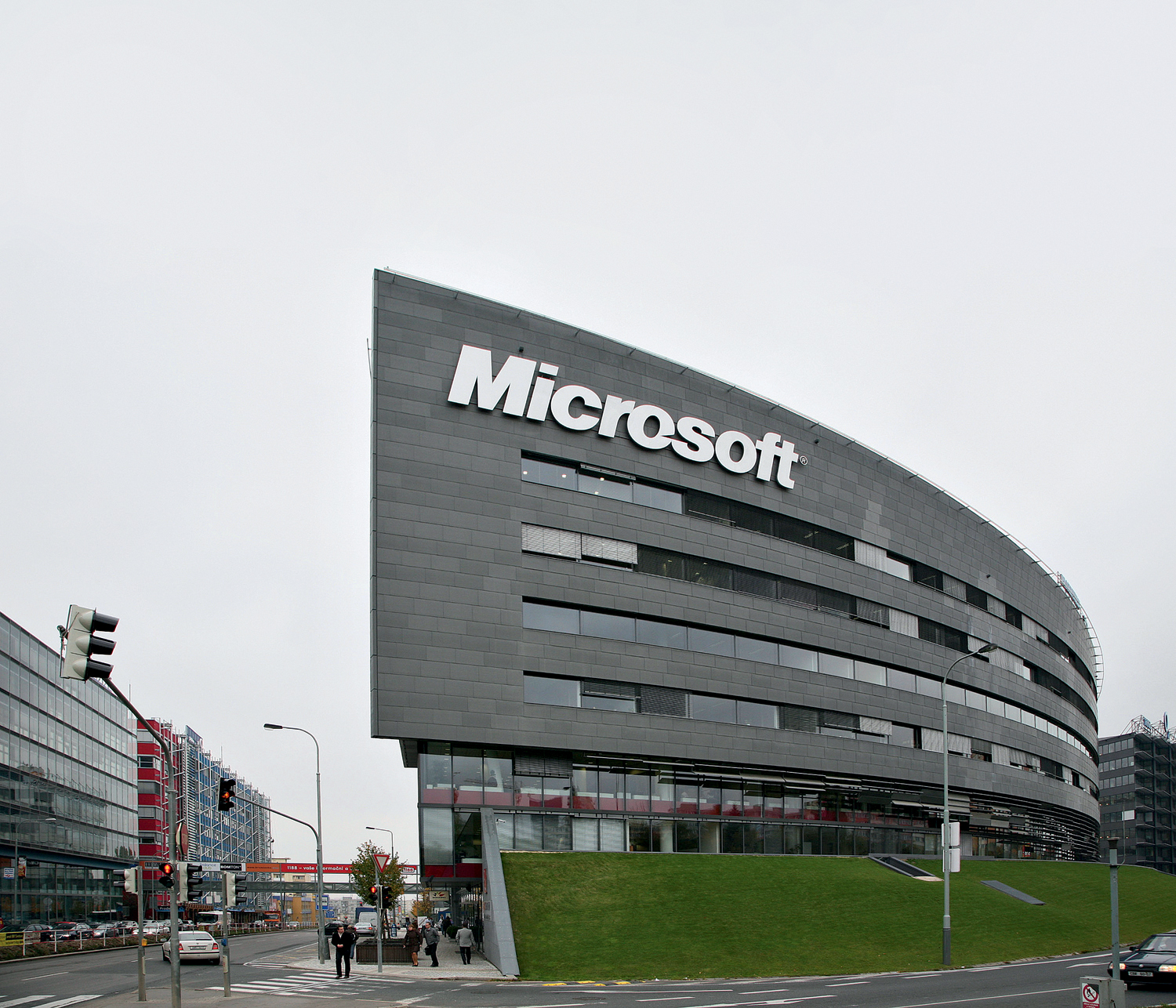 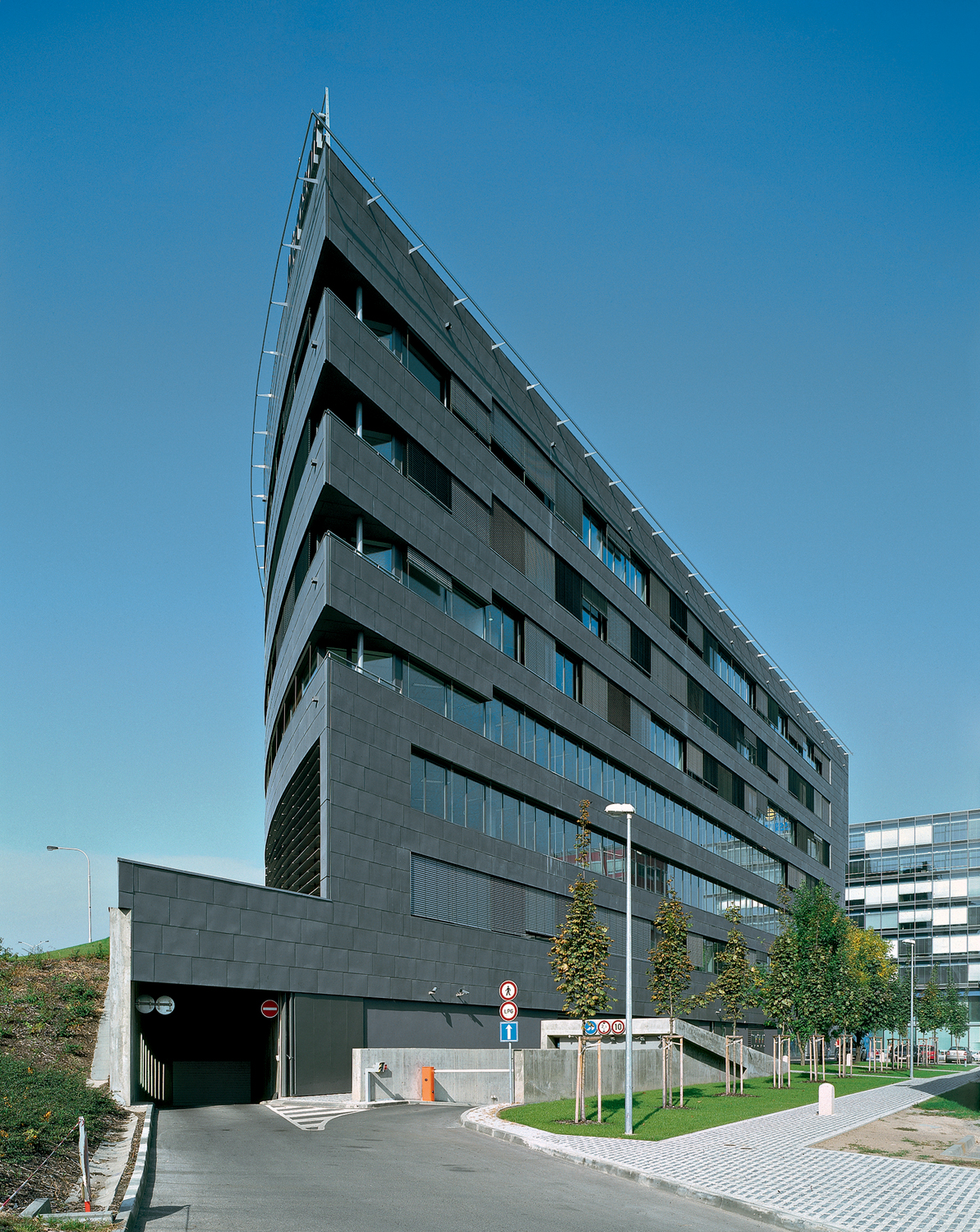 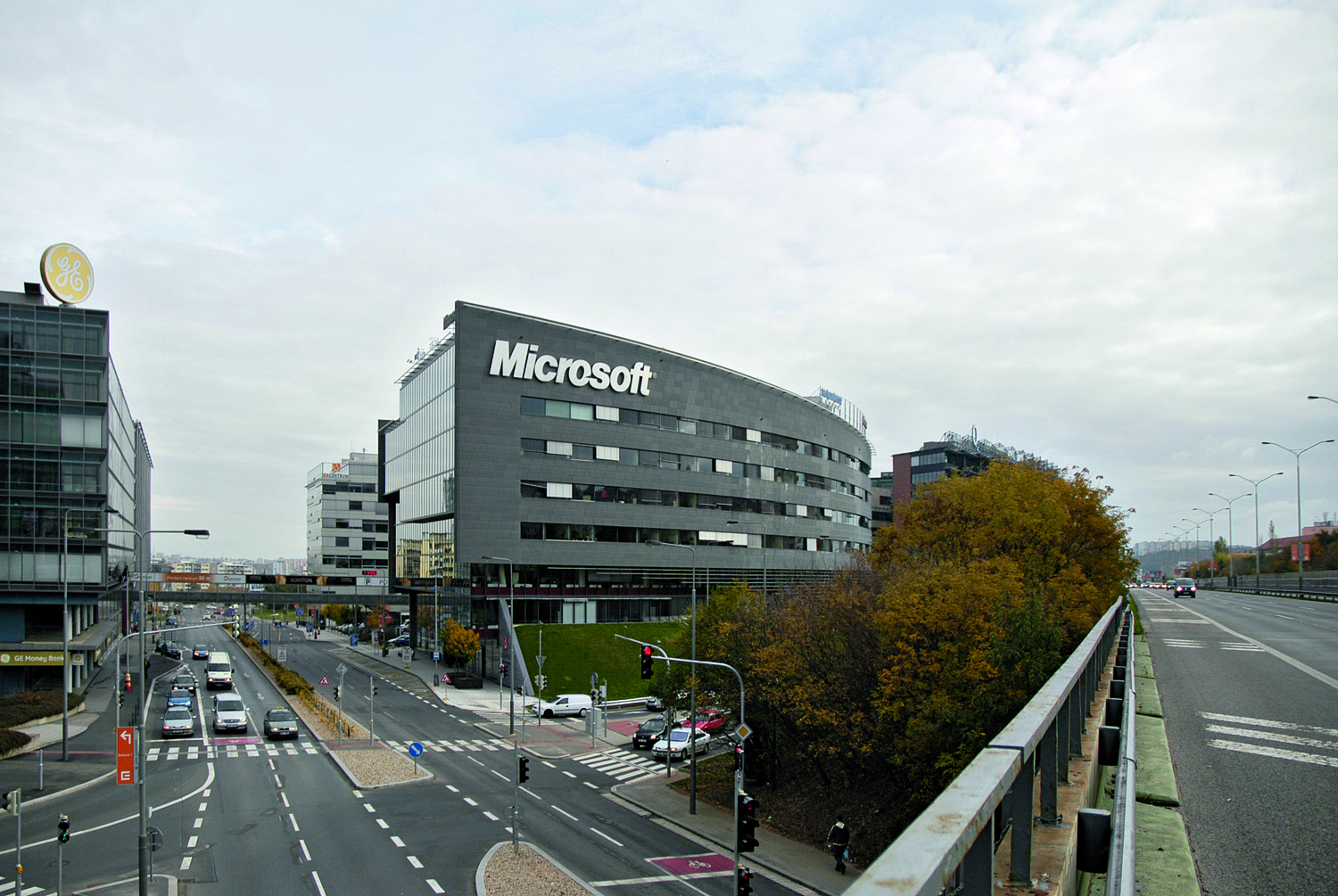 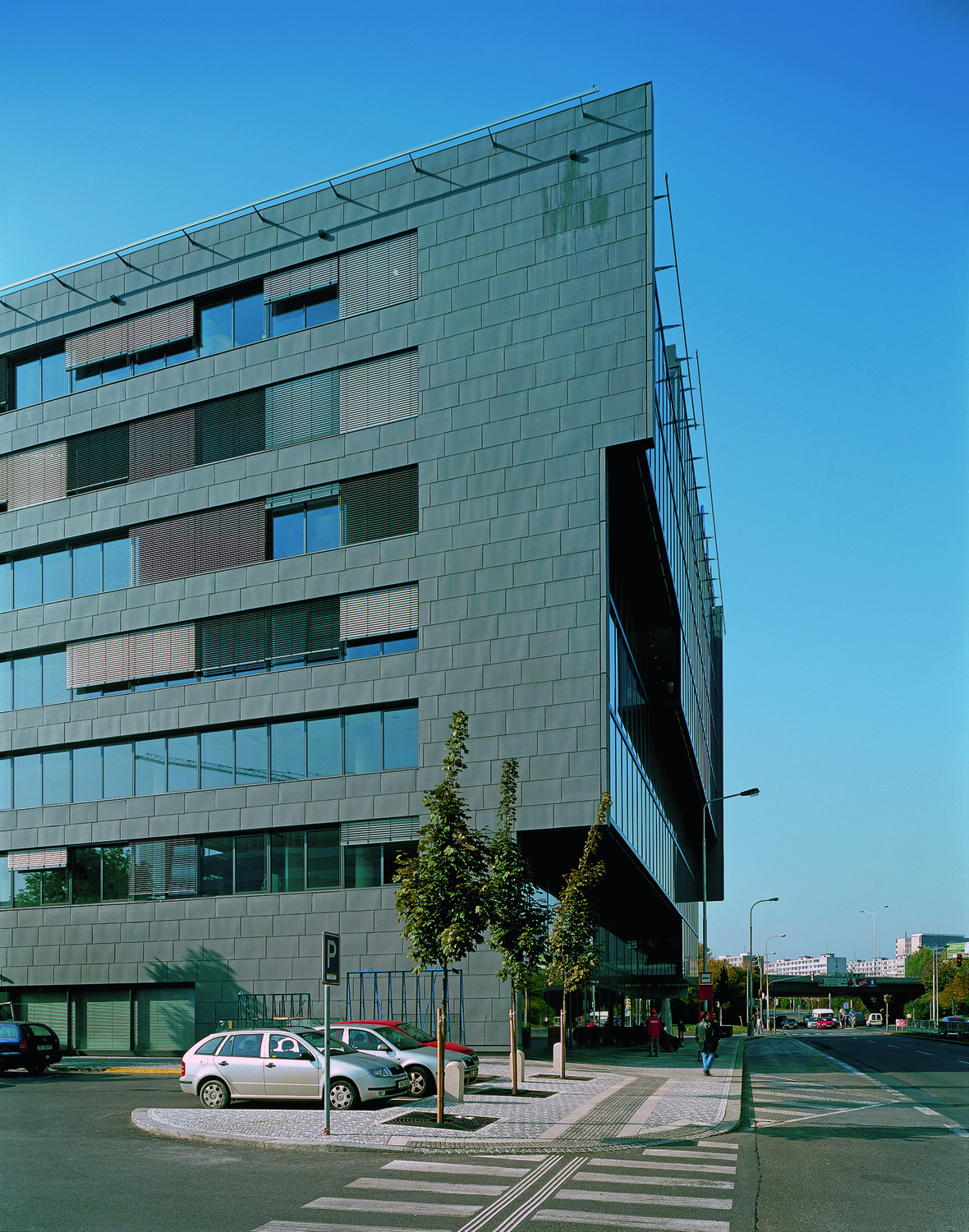 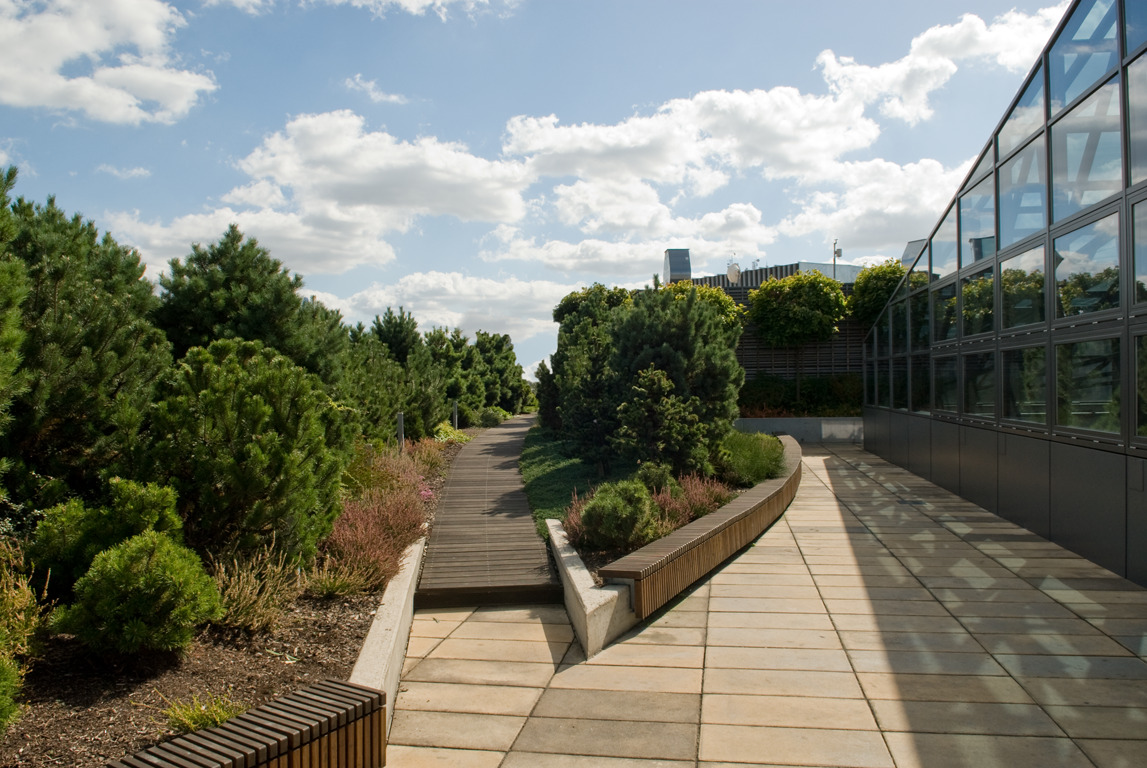 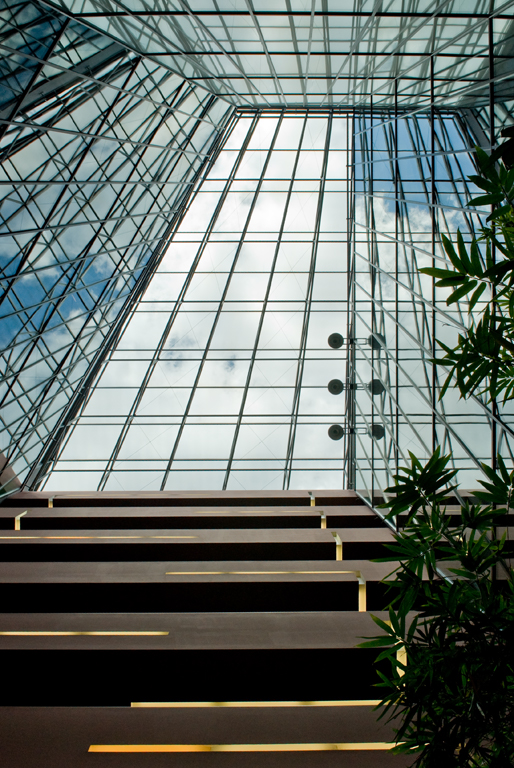 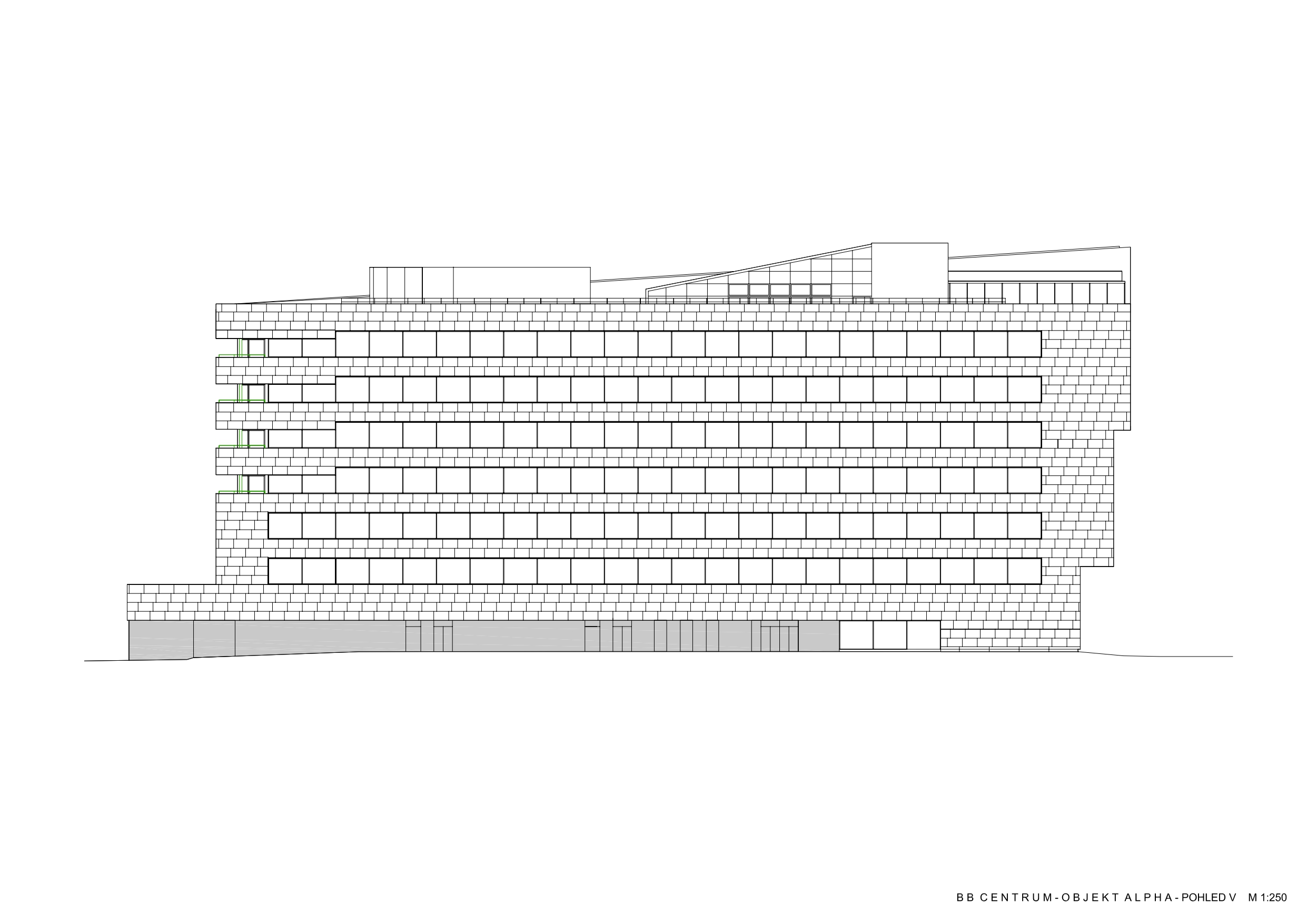 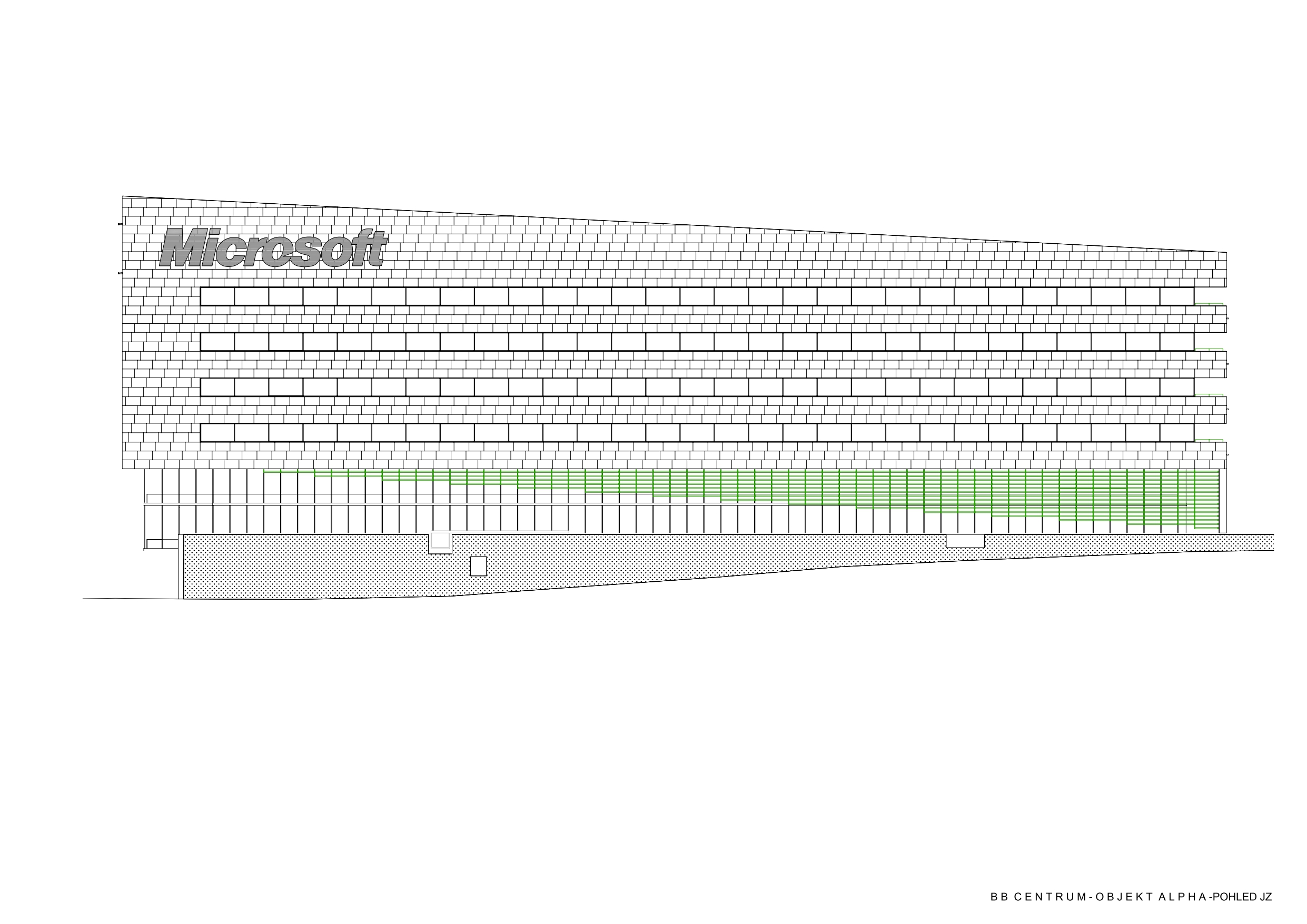