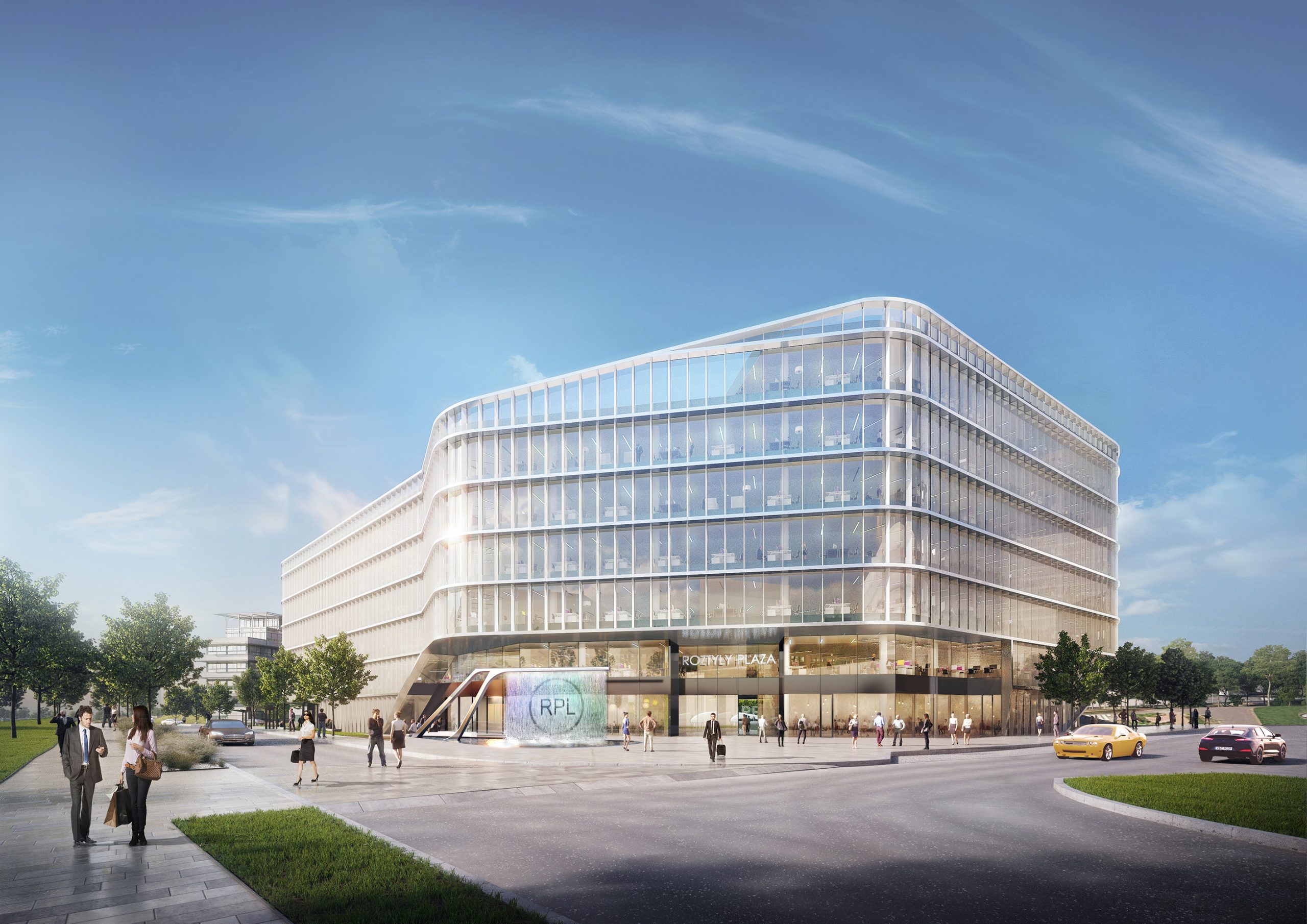 The Roztyly Plaza office building is a significant initiation step in the transformation of the current peripheral environment around the Roztyly metro station into a real urban structure in the vicinity of an exceptional nature park. It is a similarly significant step as was the first building constructed twenty-five years ago in the former brownfield site of today’s BB Centrum for HP, which marked the beginning of further successful development of the previously neglected area. Although there is a T-mobile building and a Hobby sales hall in the wider area, these older concepts do not contribute to the development of the urban environment in connection with a metro station with huge transport potential.

We developed the RP building standing close to the metro station and the forest from the outset, having this context in mind.

The material design of the building is a distinctive architectural form with orthogonal and organic shaping. Straight forms integrate better with the shape of the site and the traffic skeleton and offer a higher percentage of office space with a high degree of usability. In turn, rounded shapes at the corners of the building can express a certain solitariness and exclusivity and complement the overall geometry. However, they do not dominate to the extent that the general concept has a fluid form. Clearly defined straight sections and edges are still crucial for the overall perception of the building and its timelessness. It is also possible to articulate the building’s archetypal elements (entrance, arcades) well within this principle so that it is immediately apparent to everyone where one enters the building and where, on the other hand, one can expect the utility sections of the building (parking entrance, supply).

The mid-rise (six stories and one setback) volume of the building combined with gently rounded, straight, and sloping forms well engages with the nearby natural setting while having a compact urban form with a ground floor that contains the necessary shops, services, and restaurants that also serve passengers transferring to buses. In addition, the designed streetscape around the building enhances comfort and safety for public transport users and the broader area around the building. Bus stops are located around the perimeter of the safely lit building; seating areas are added together with possibilities to shelter from heavy rain, a generously designed water feature, and greenery.

The building’s compactness that is, among other things, positively significant for its energy efficiency; it is established by the central hall around which the office operation is organized. The dimensions of the hall are generous in relation to its height and sufficient to provide good daylighting for the offices facing it. . The panoramic lifts at its centre and a system of circulation walkways make it extremely easy to serve the various sizes of tenant units or departments and provide short walking distances to the workplaces in a pleasant environment. In addition to the lobby and the interior garden, there are other specific areas on the ground floor for informal working environments and public gatherings.

Roof gardens have been a constant feature demanded in Passerinvest buildings for a long time. In this case, they take advantage of the unique proximity of the forest. In addition, they are equipped with a wide variety of additional elements such as gazebos to protect against the wind and a kitchenette with a table for the building’s users.

The RP is designed with the landscape character of the site in mind, considering environmental sustainability and low energy consumption. 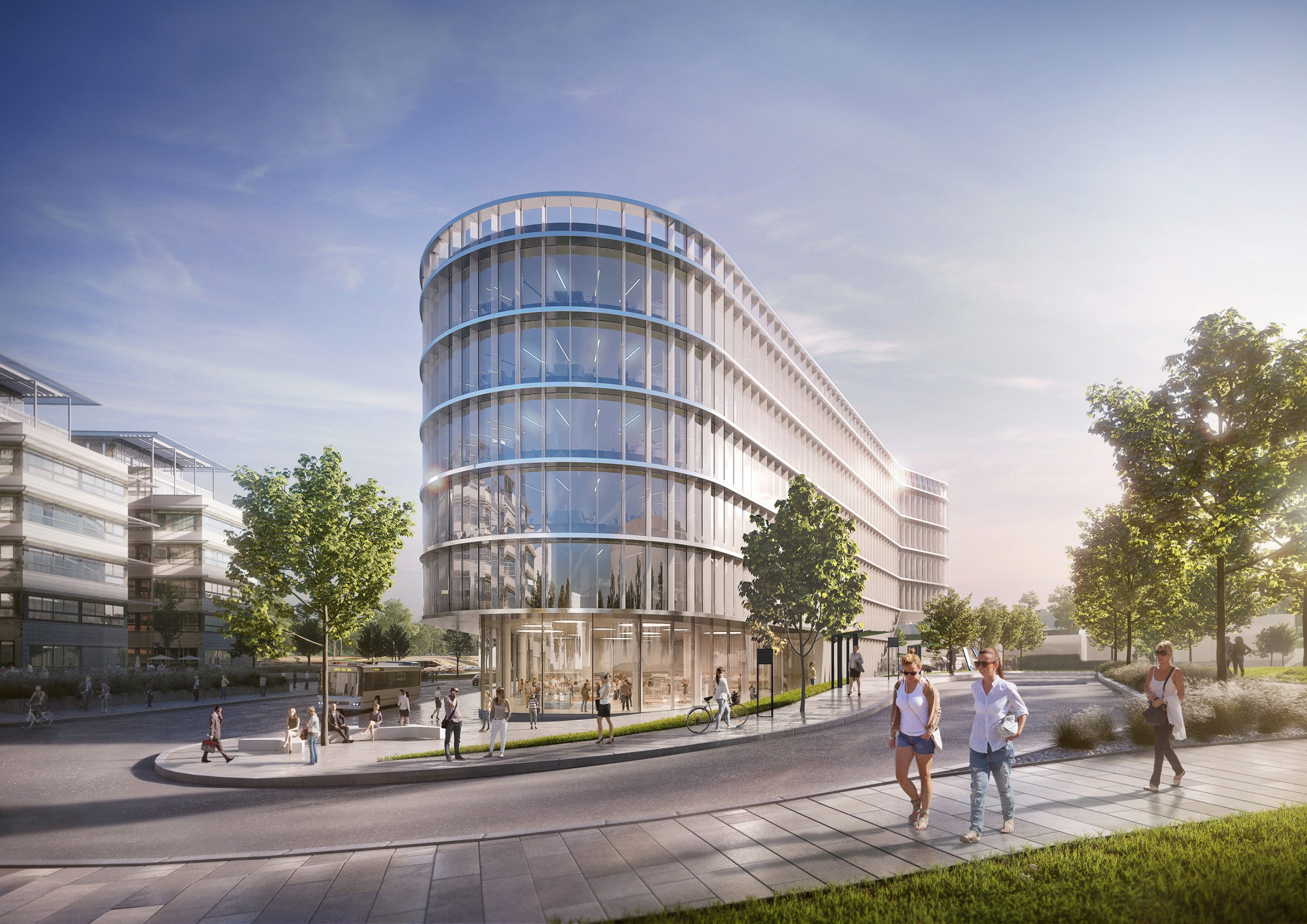 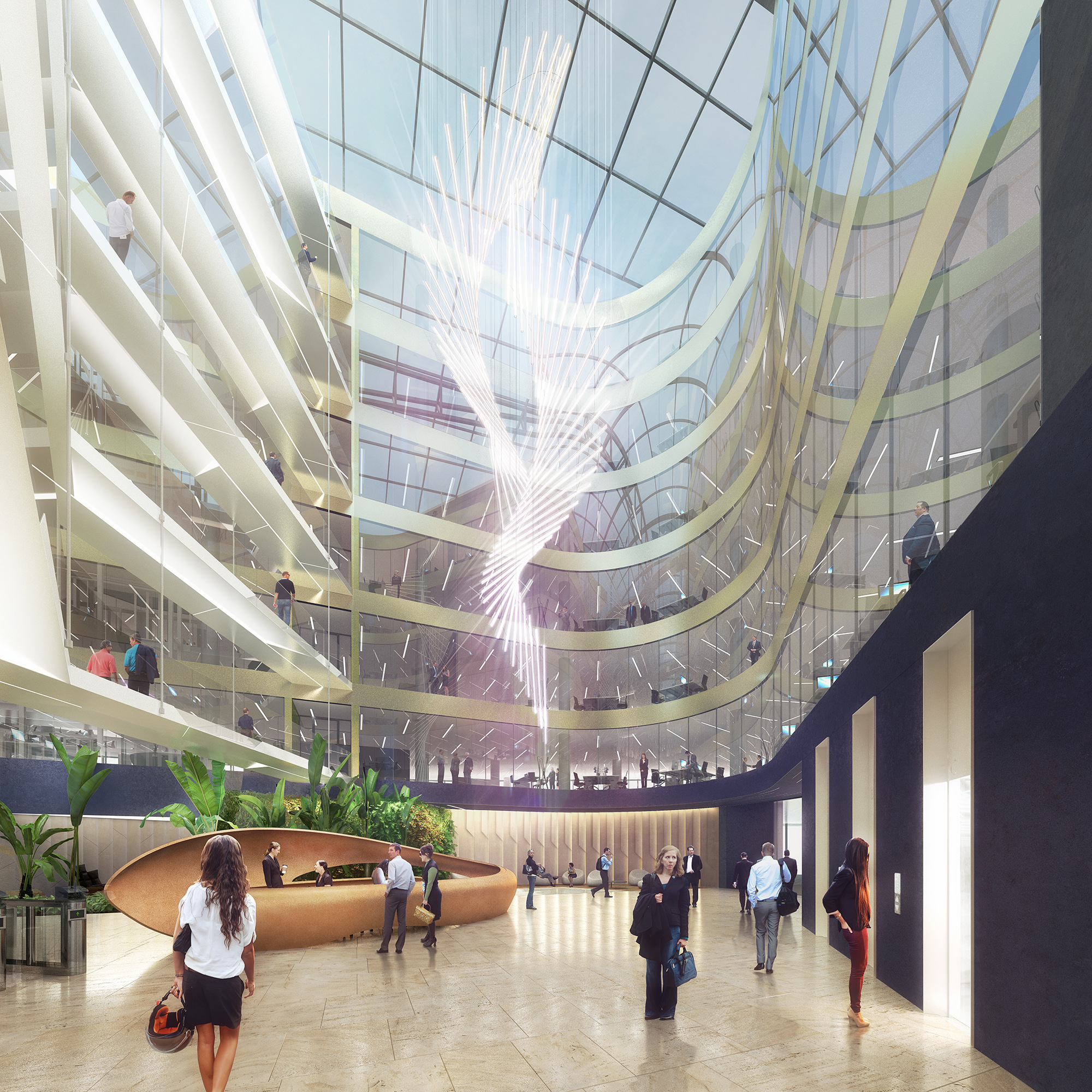 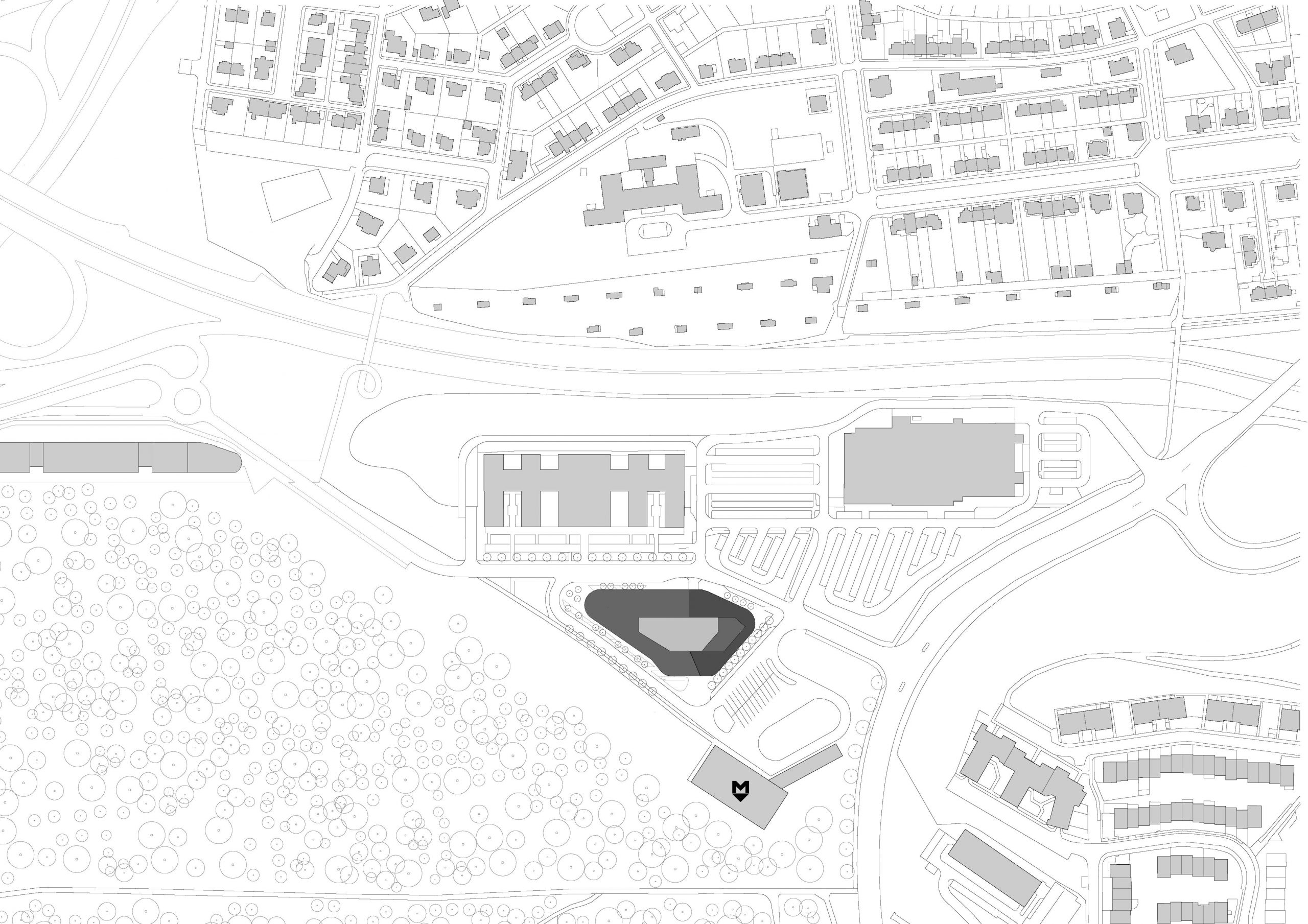 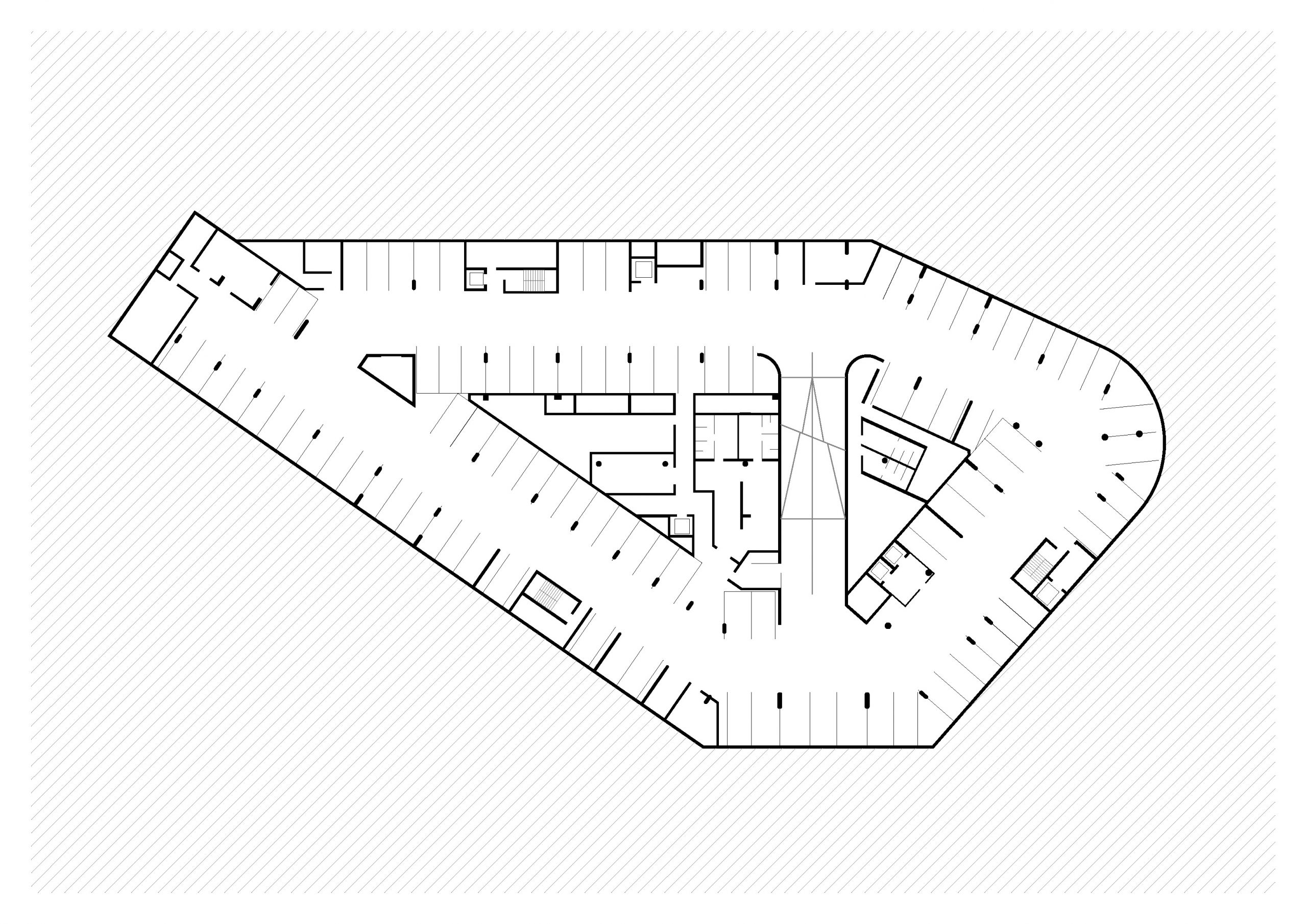 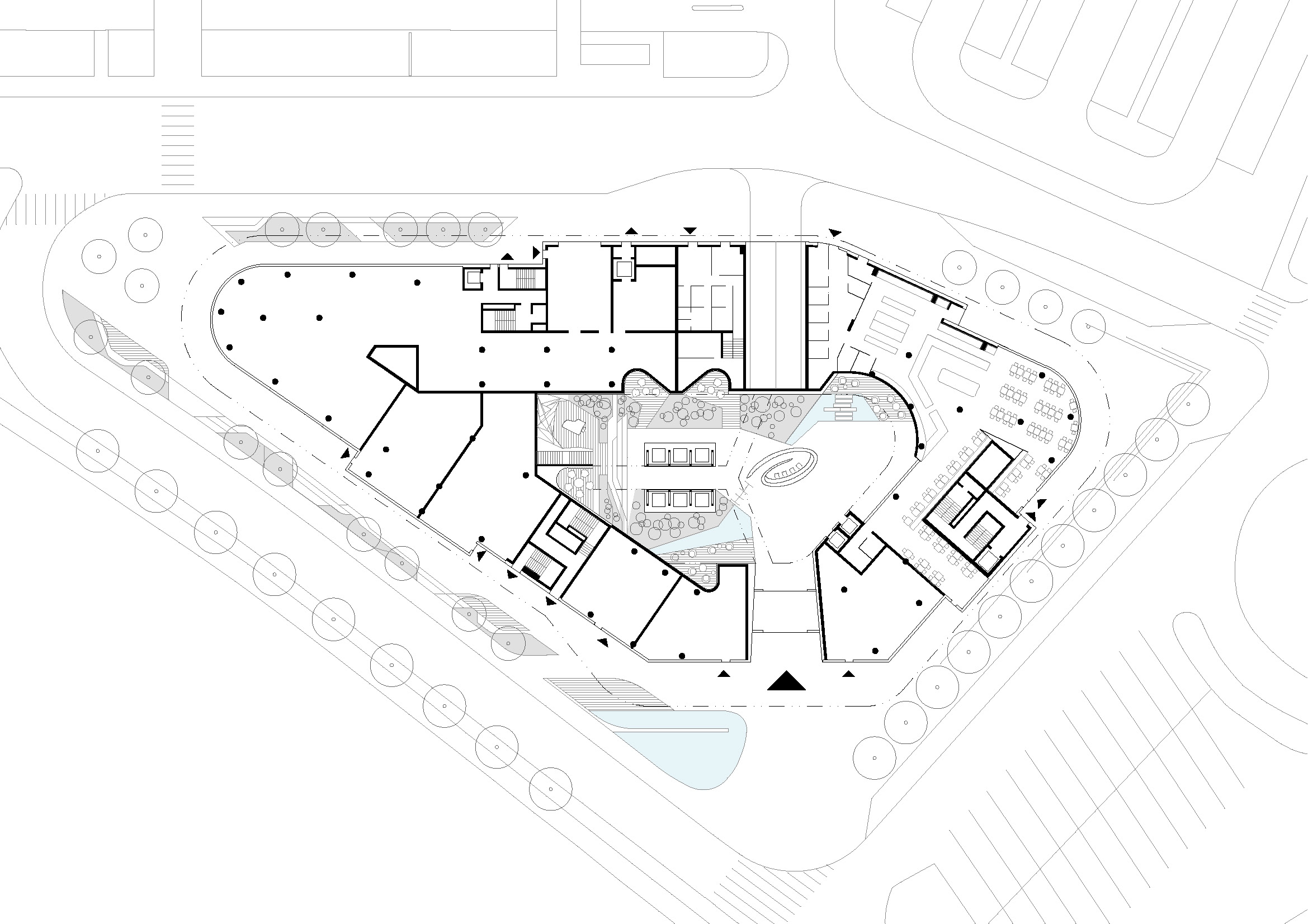 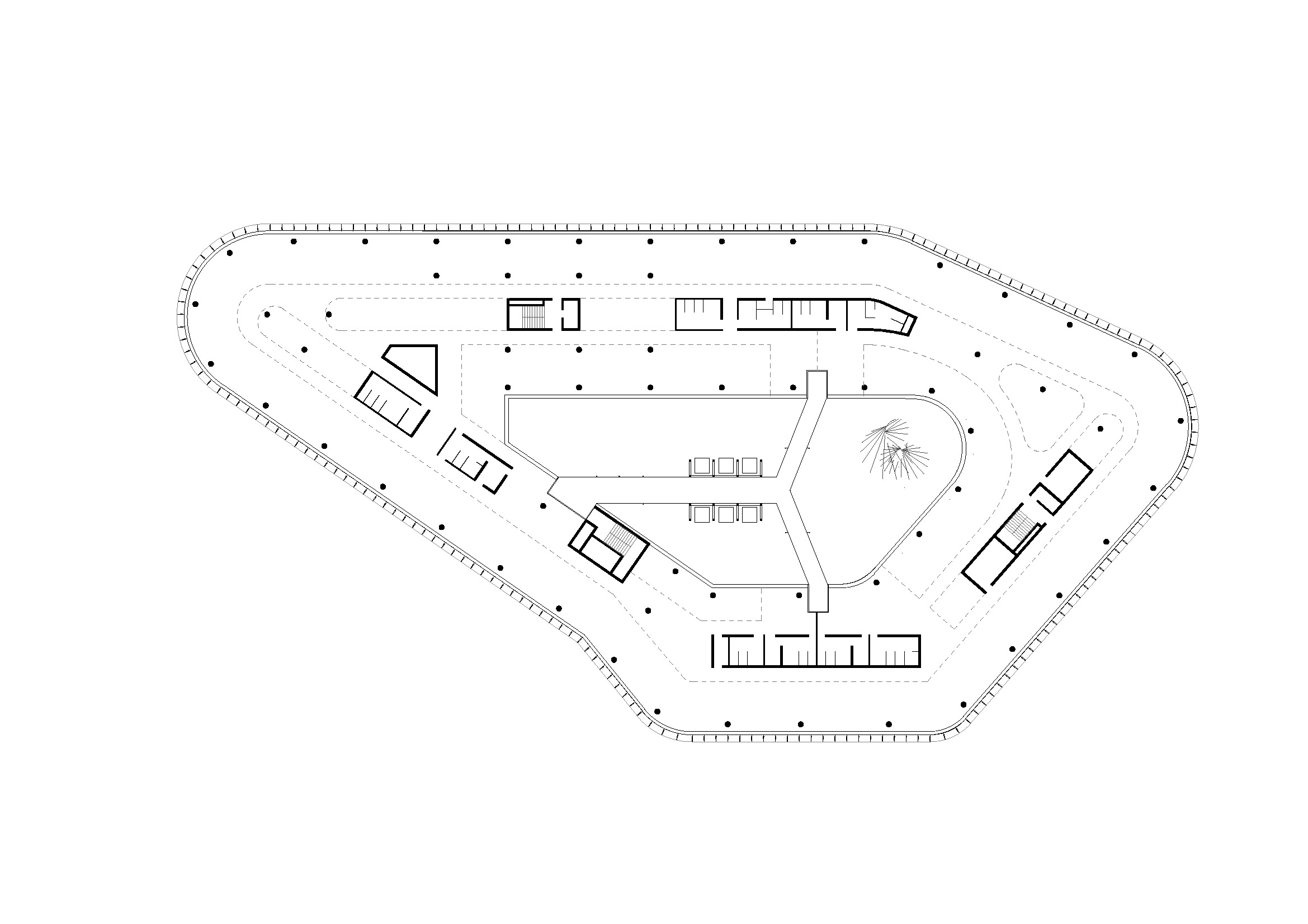 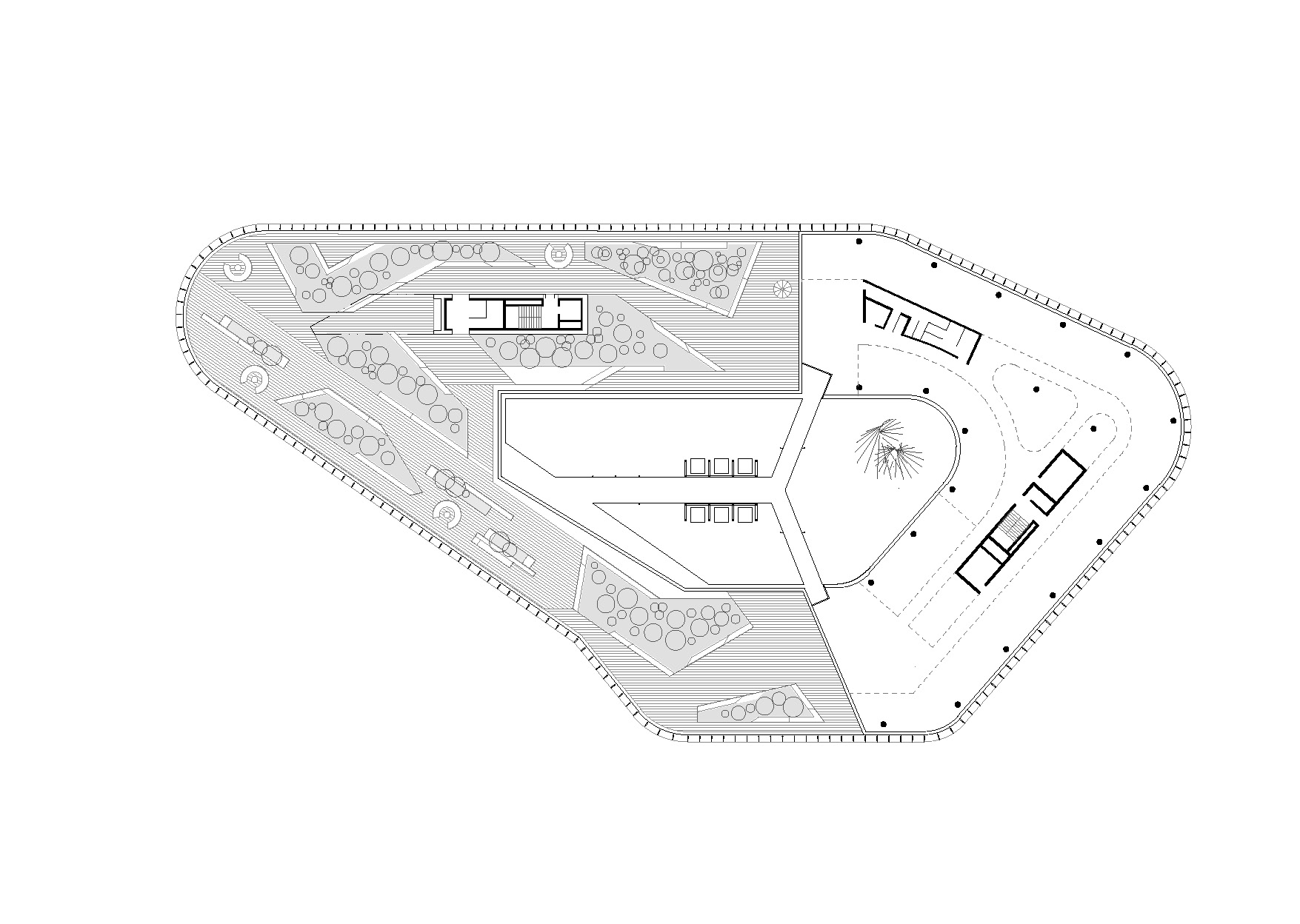 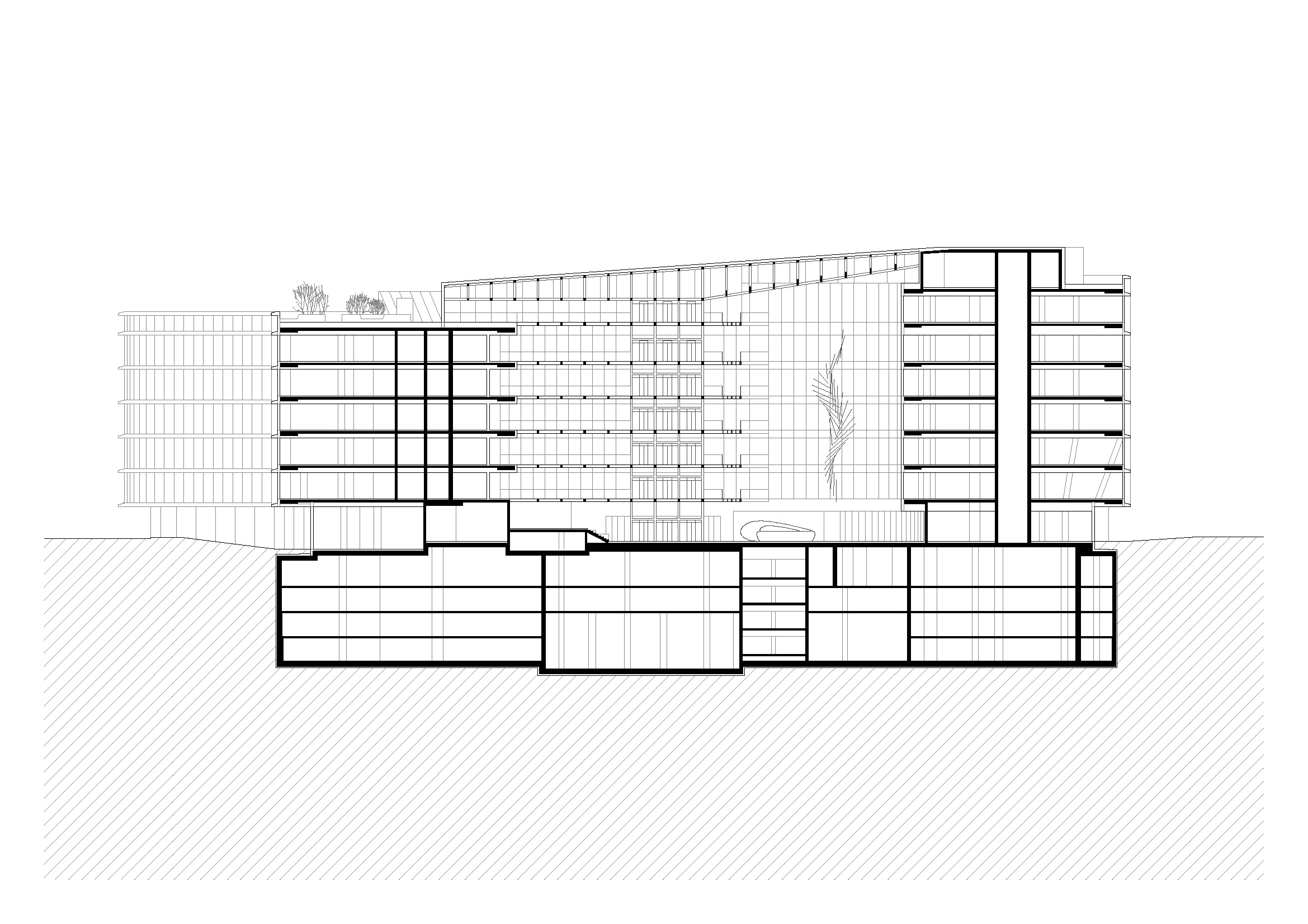 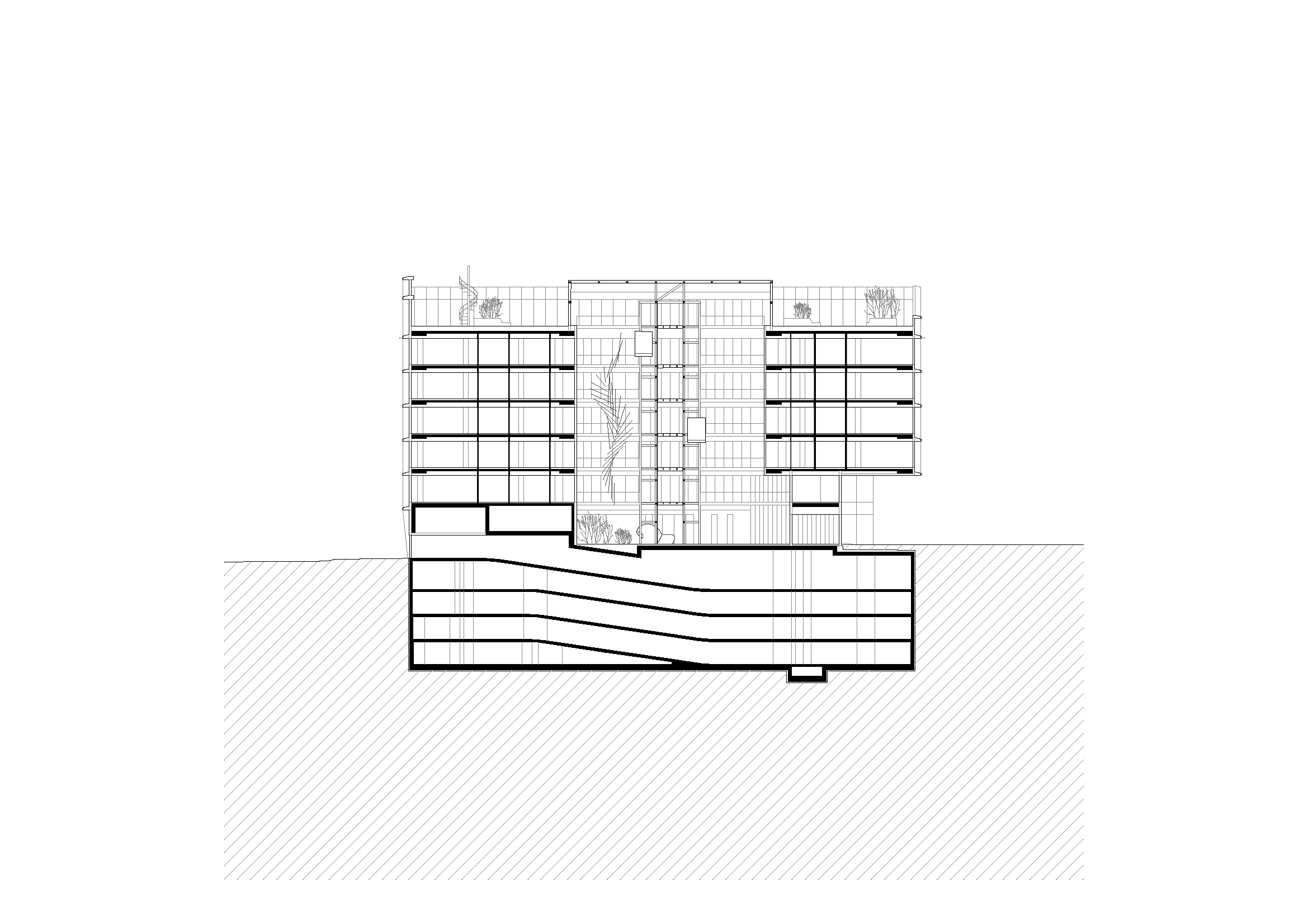 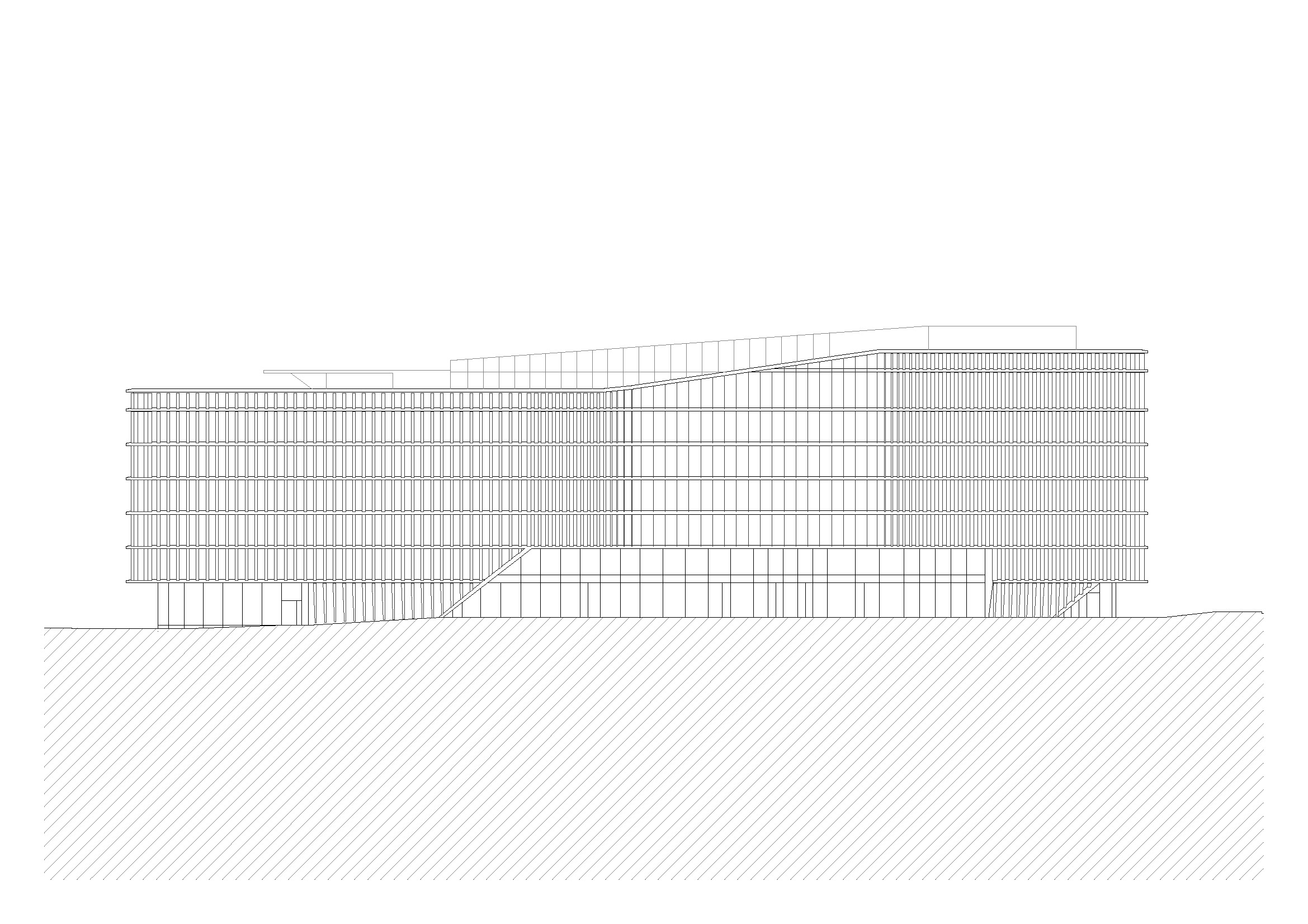