Working on this project was special not only because designing a single-family villa is a particular task, but namely because our studio had designed a house for this married couple twenty years ago, and they have still been living there. The first house was developed in a different situation, it is in a different region and smaller; but for our work on a new concept existed an already established, more personal relationship with the client.

The brief was not any unusual – the requirement was to design comfortable housing for an older couple with adult children living separately so that their families could stay overnight in the villa from time to time.

Designing a villa to Průhonice was somewhat tricky in that Průhonice is a very contrasting environment. Next to the beautiful chateau with the famous park, there are also some not so lovely features here typical for Prague satellites such as an utterly heterogeneous development of houses dating from the past fifty years, little integrated into the original rural structure of the village. The advantage is that the street where the villa is designed is right next to the Průhonický park and the link to it is, therefore, must stronger than to the surrounding development. Also, the fact is important that the street was founded in the 1970s and the green in local gardens is, thus, grown now, and the entire environs savours stabilised no matter the heterogeneous character of individual houses. The plot size of 1,500 m2 was somewhat restrictive to the design linked to the Průhonice Land Use Regulation Plan specifying the maximum rate of development 20%. Due to this restriction, we had to position the swimming pool into the basement and, employing more complicated landscaping of the garden, develop such a design establishing an important contact with the garden. The positive feature of the garden was grown threes of which the majority could be preserved and reused for the new project.

Since we had not found any existing architectural values in the streetscape to which we would like to relate our design, we opted for a concept of a simple, strict form facing the street to the north and, contradicting to it, a more diverse one southwards to the garden. A generous two-storeyed reinforced concrete frame setting up the “high order” and the architectural scale of the whole build is the means linking both different forms of the house (not just the facades). SA vertical modular pattern establishes the north façade reflecting the lower need of fenestration in this direction; the façade is finished with a traditional render. The southern façade from which a distinct wing of the primary living part projects into the garden is entirely different; by its large glazing, it maximally opens to the sharp relief of the garden, and its cedar cladding bolsters the house’s interconnection with nature as well as the environmental intimacy in this part of the plot. An intense interconnection, mingling of the home and the garden, and creating of protected privacy in its part is an important principle of our design. The garden is planted with the same species of plants as the nearby Průhonický park; the steeper part of the landscape is covered with rhododendrons the same as in the park.

Základní obytné funkce domu se odehrávají, tak jak bylo požadováno klientem, v rámci přízemí. here is a large living room, and a dining room with a kitchen here dimensioned for the gathering of a larger family; there are the master bedroom and appropriate amenities here, too. Two guest rooms and a study with a separate entry form the street are on the first floor. Aside from the garage and technical rooms, there are an eight meters long swimming pool with a sauna, and a small fitness room in the basement. By its glass wall, the swimming pool opens to the lowered part of the garden which is recessed to bring pleasure also into this part of the house. 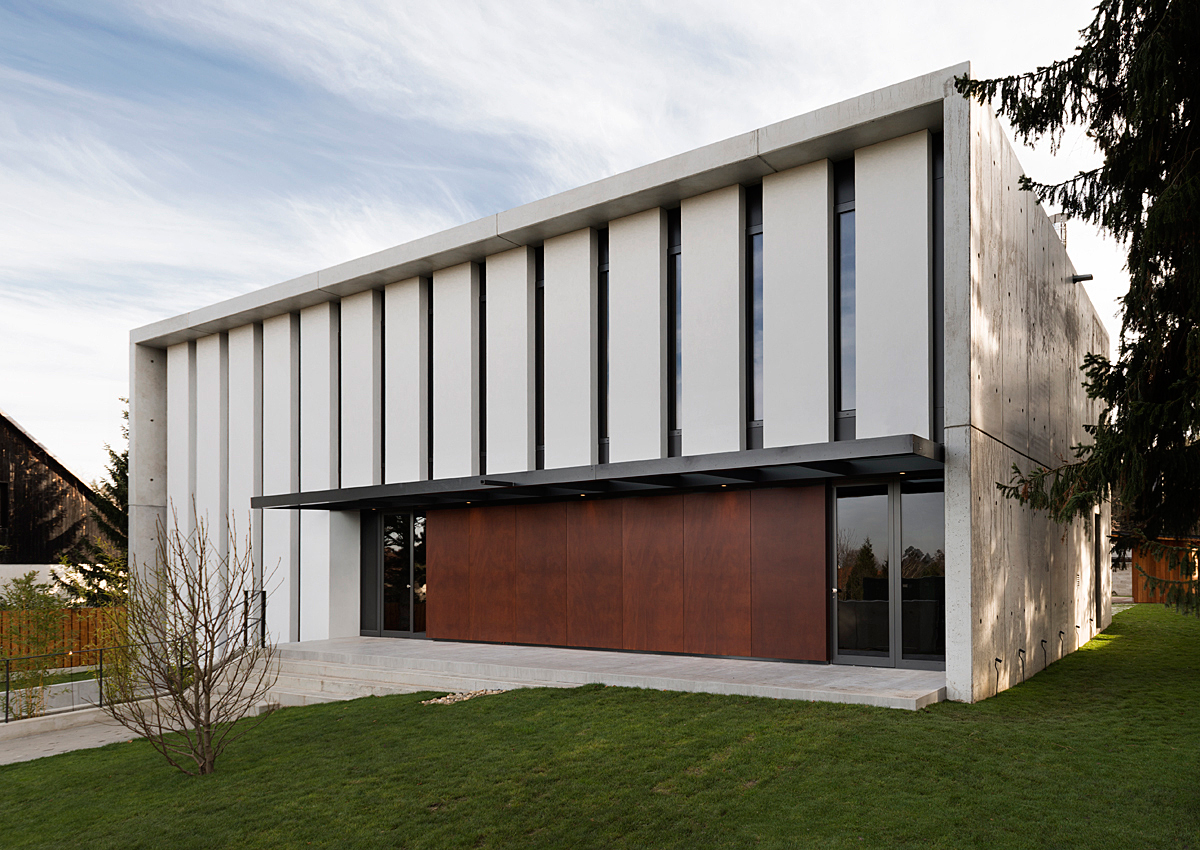 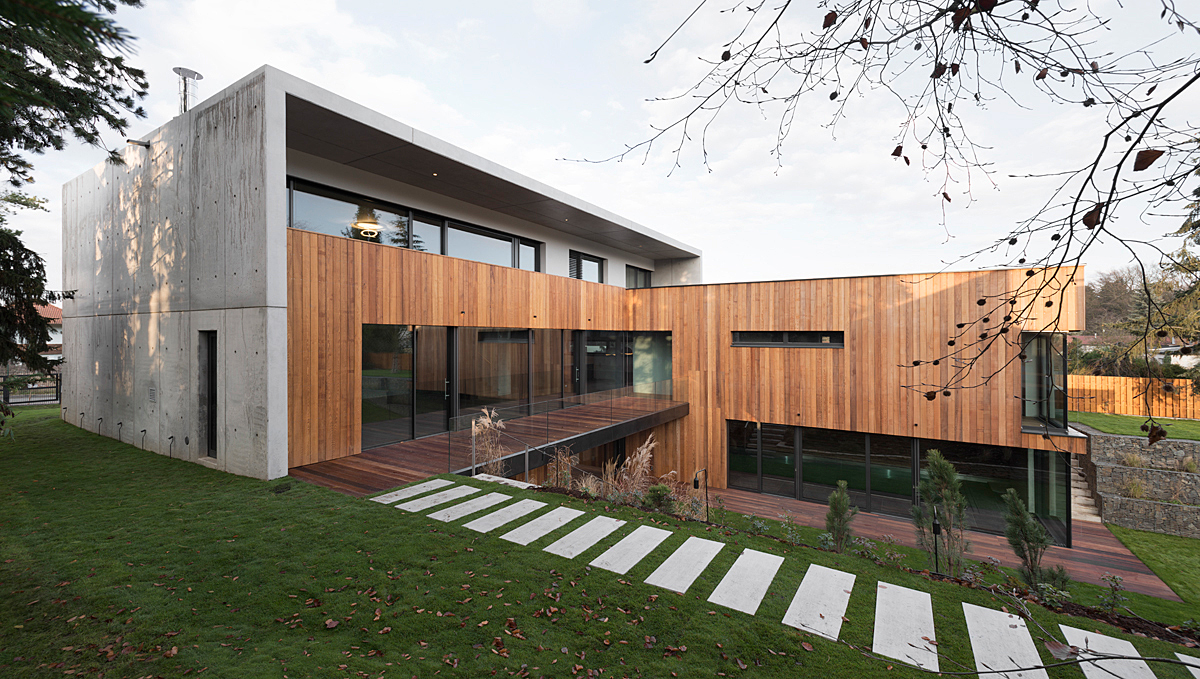 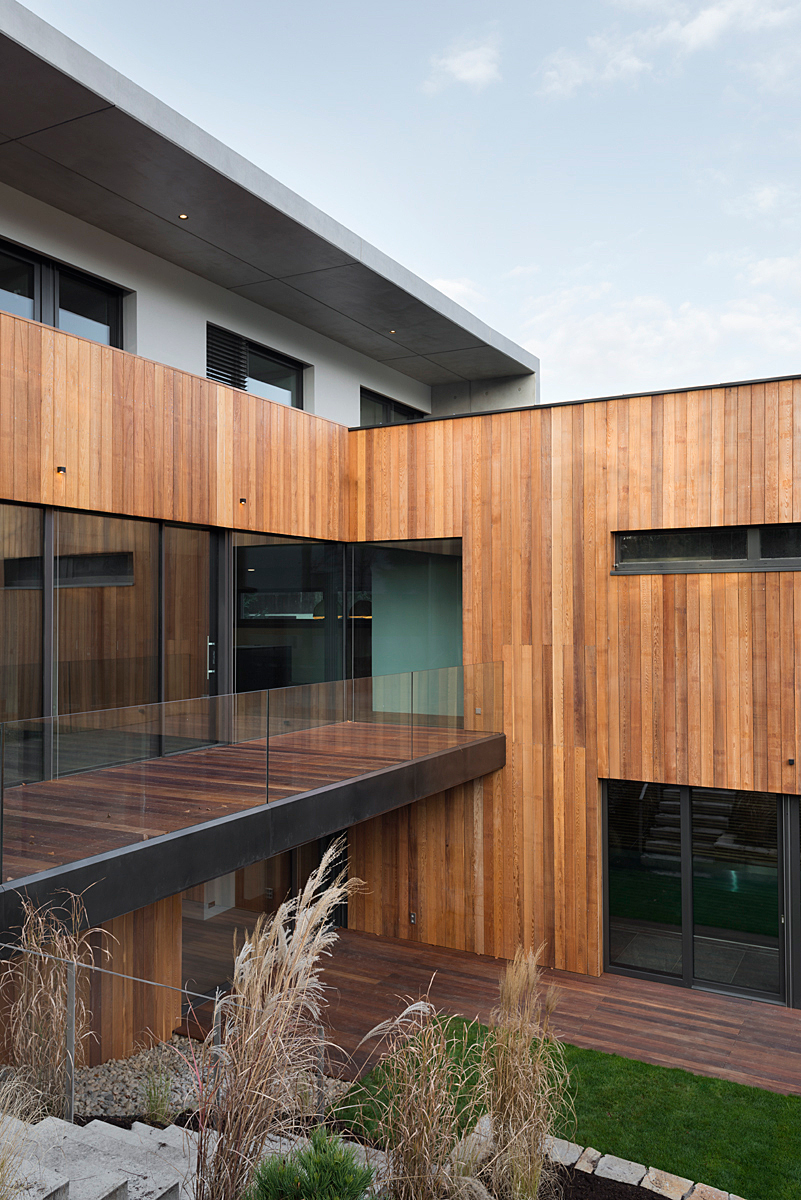 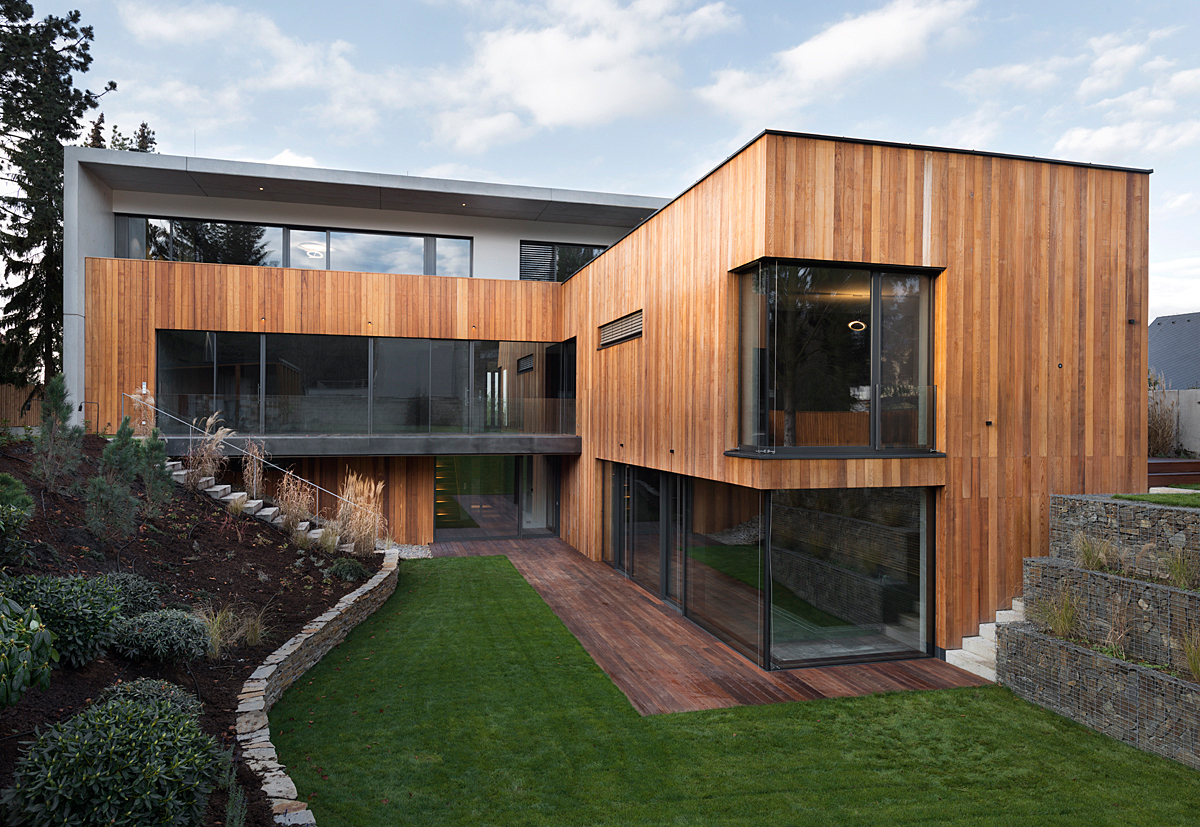 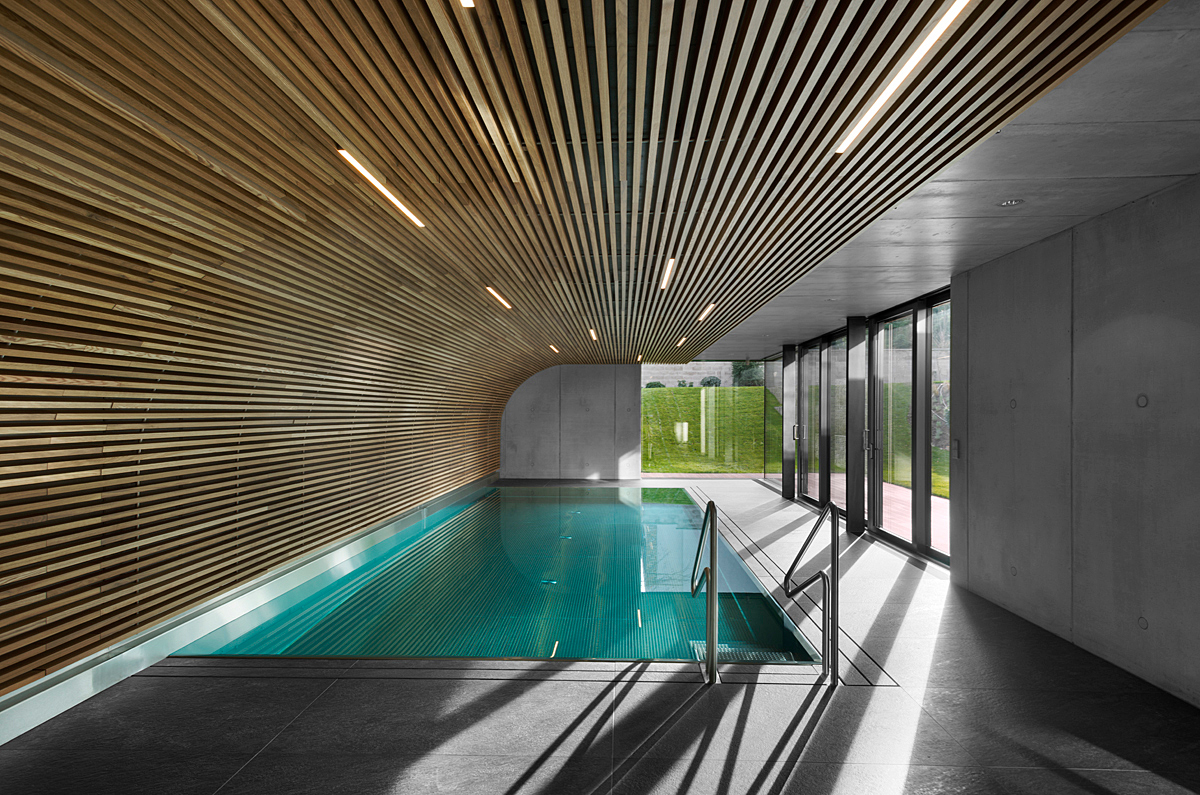 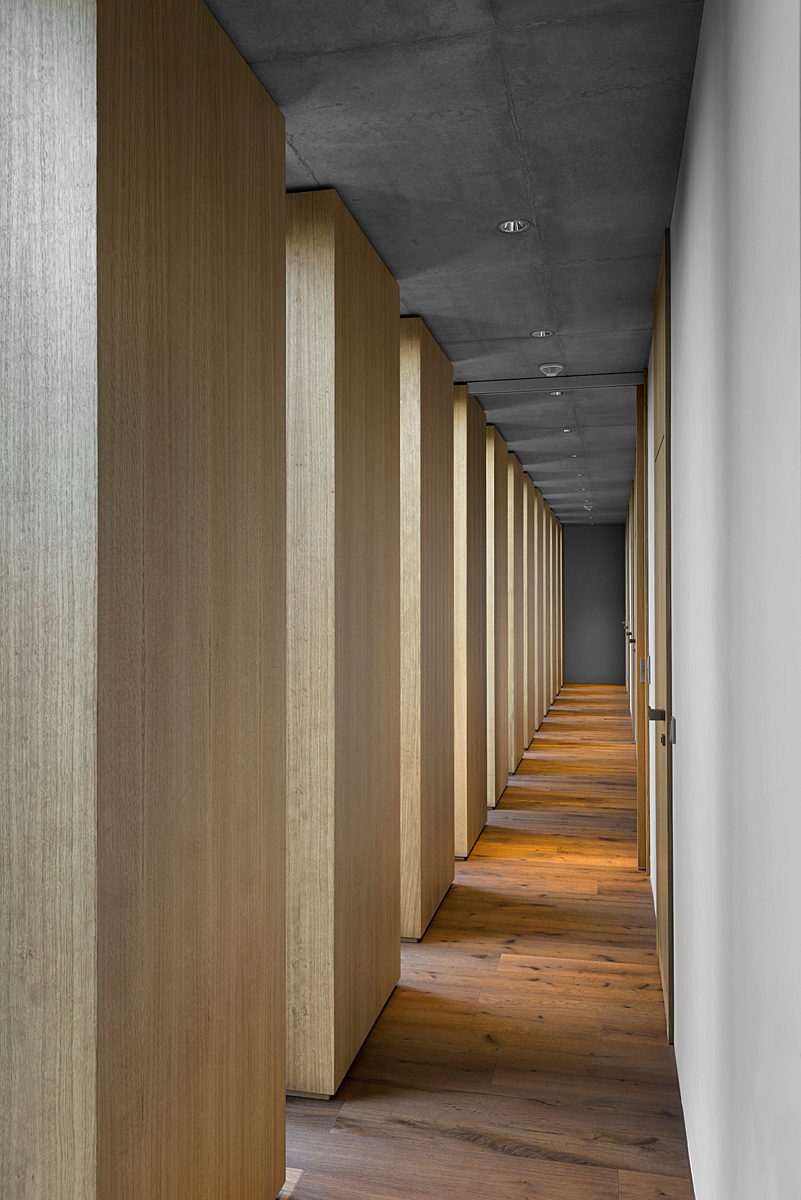 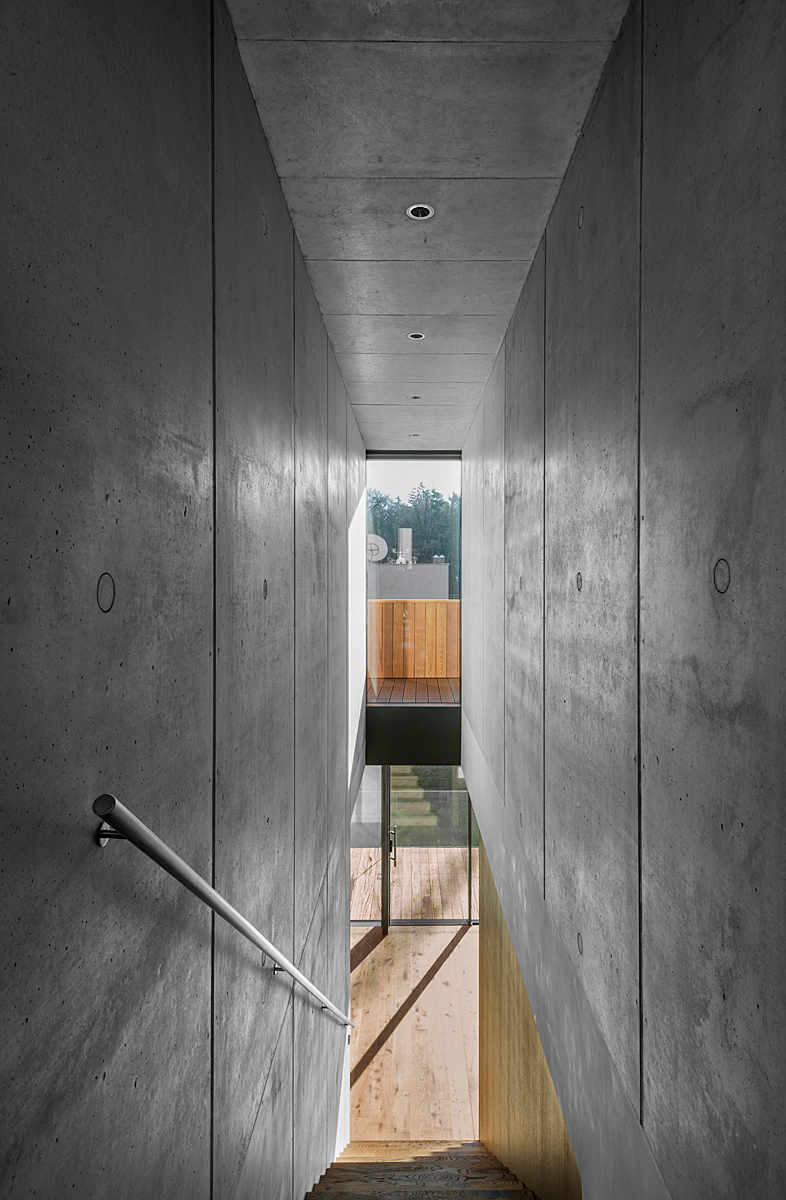 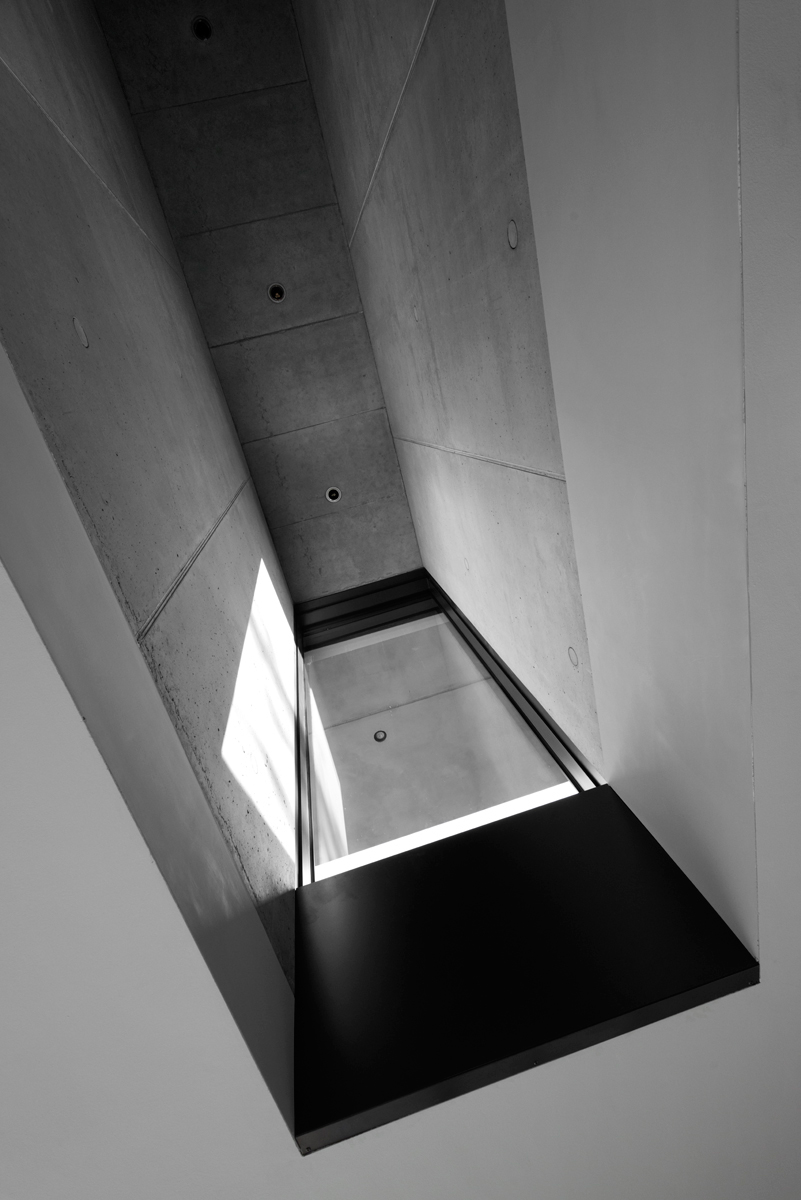 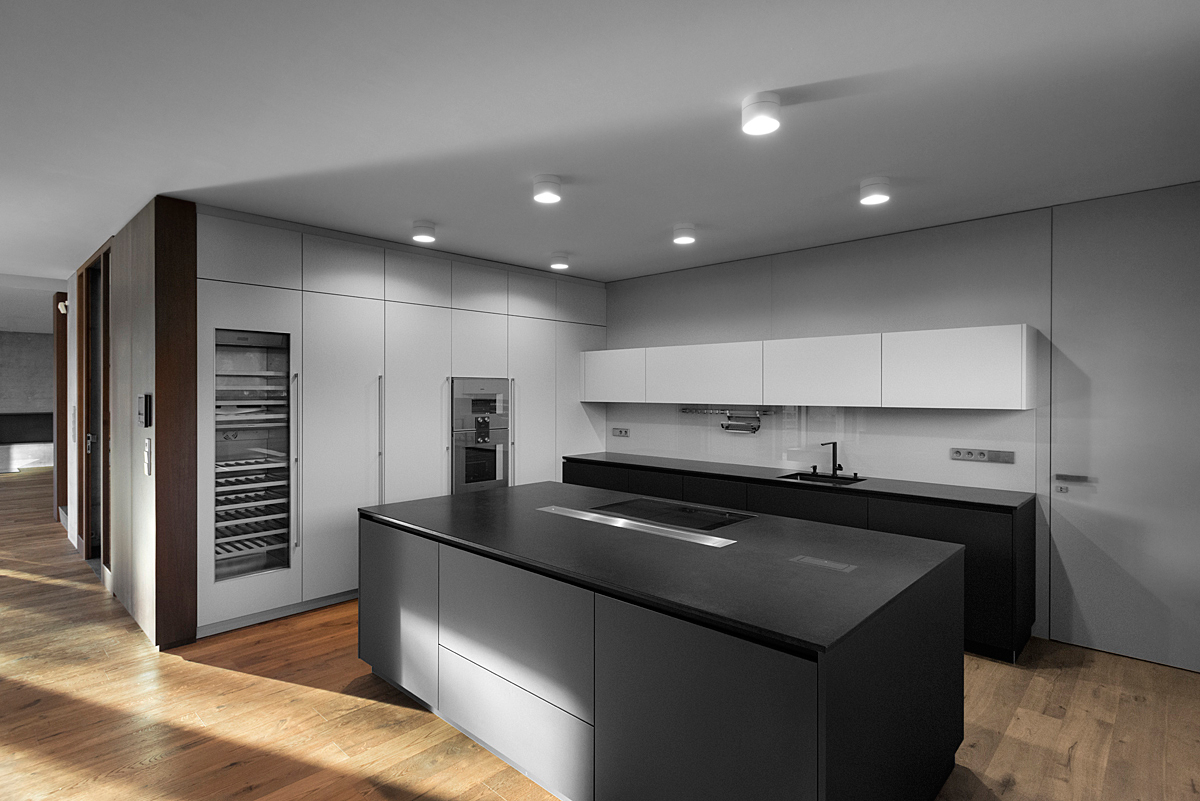 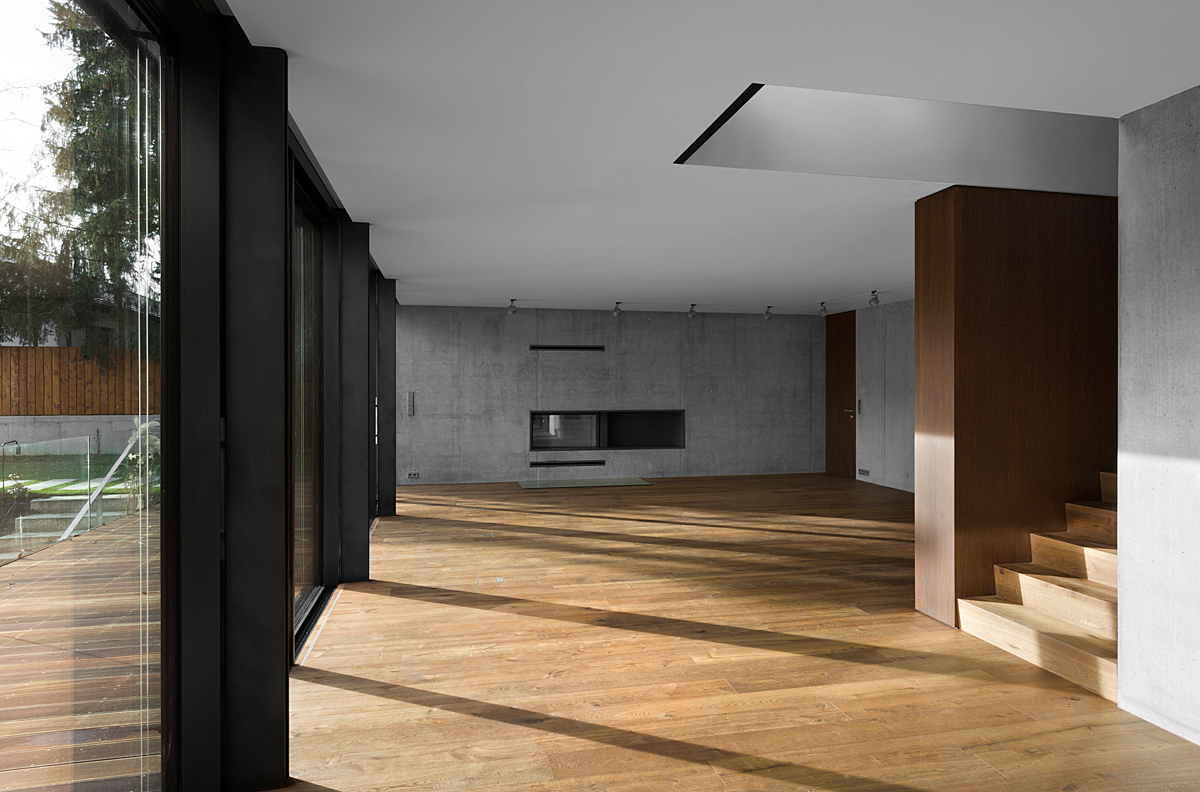 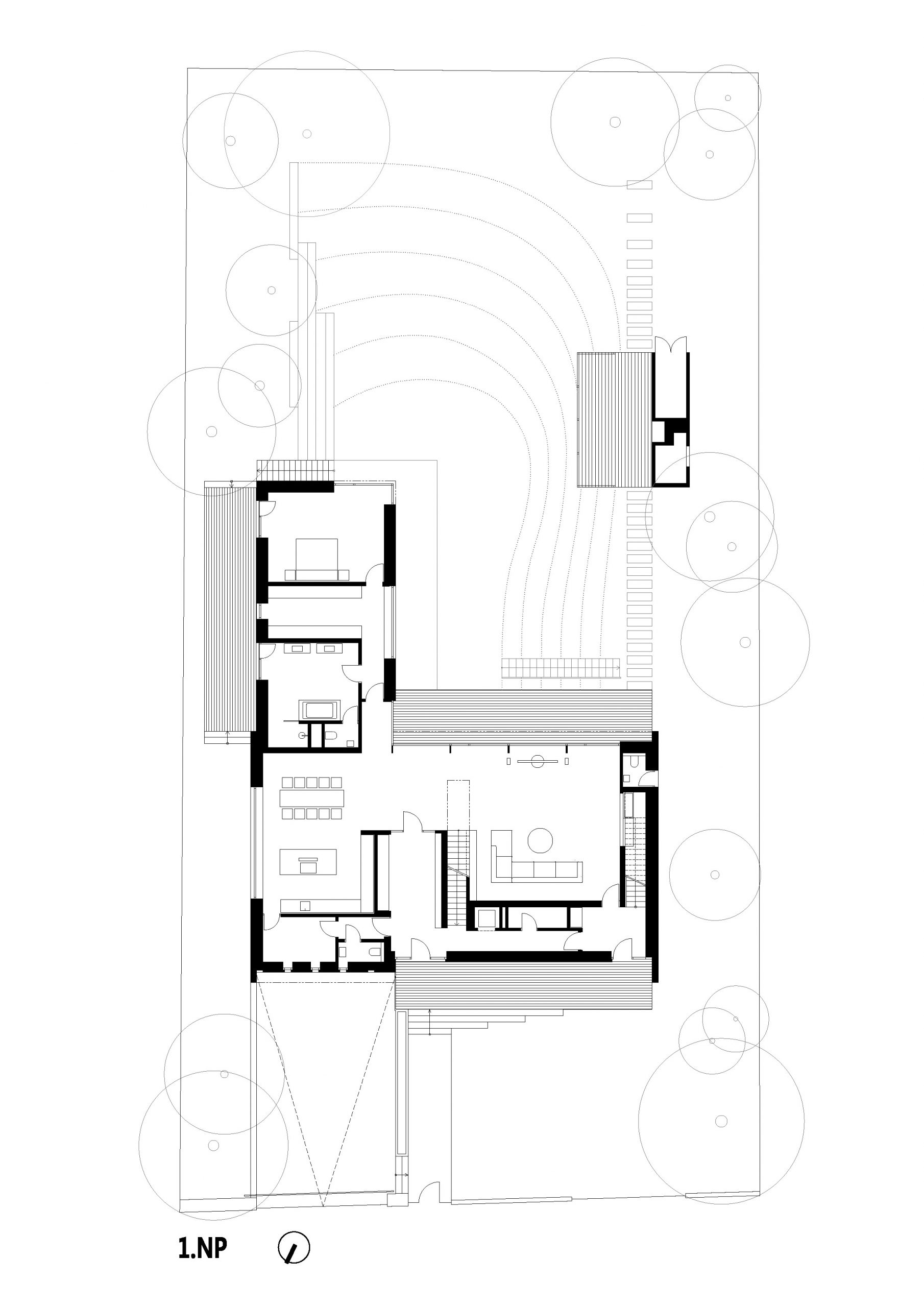 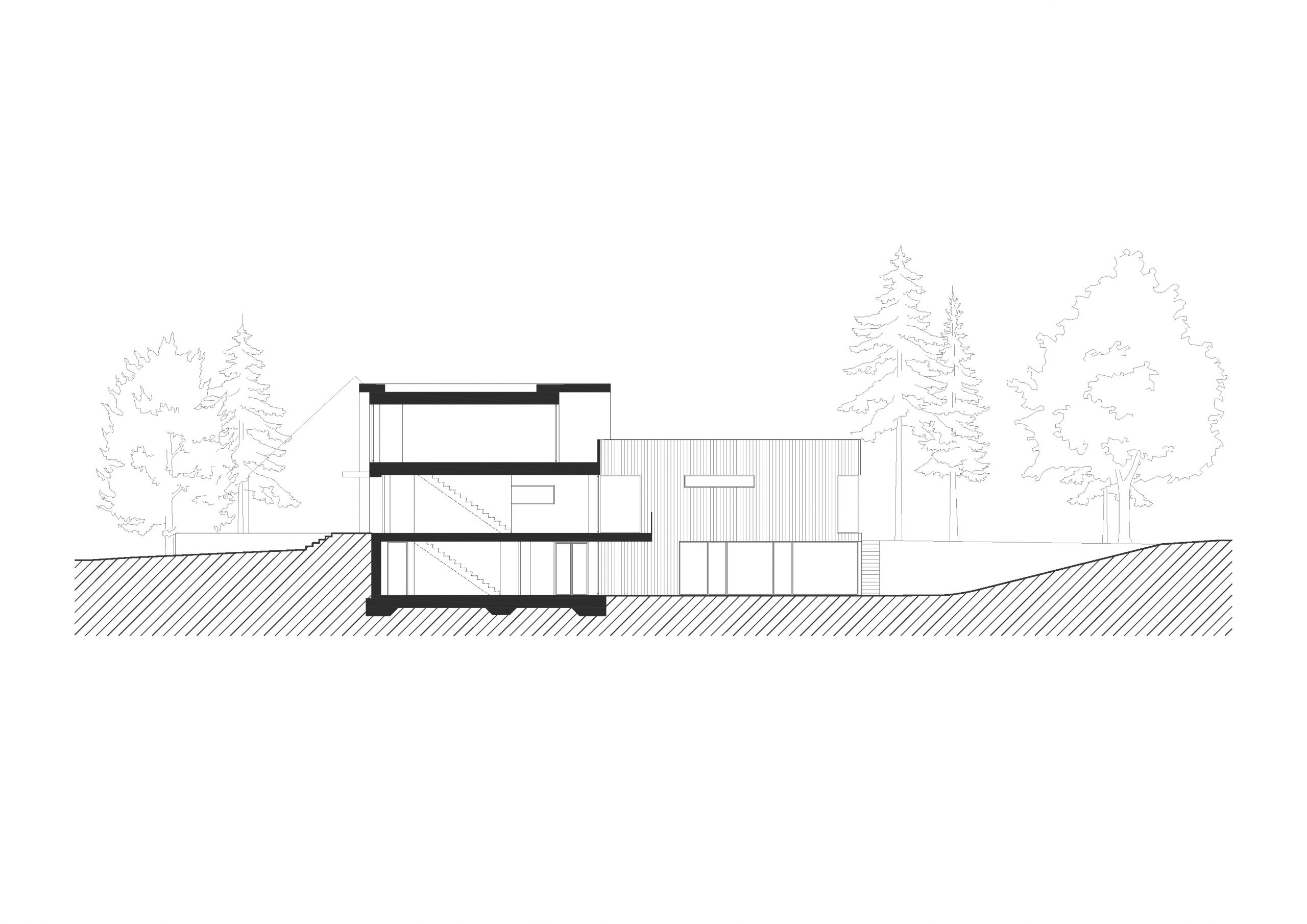 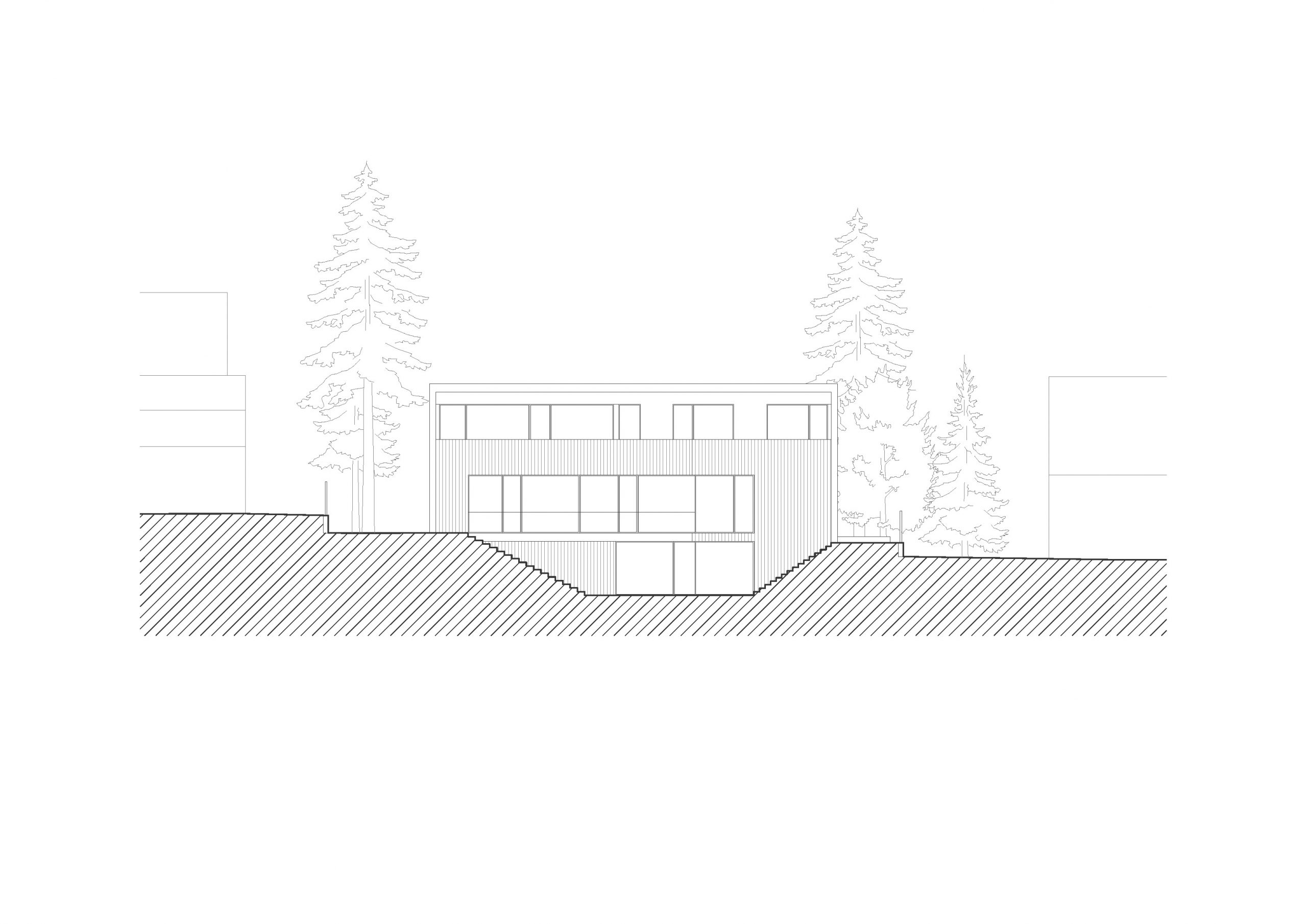 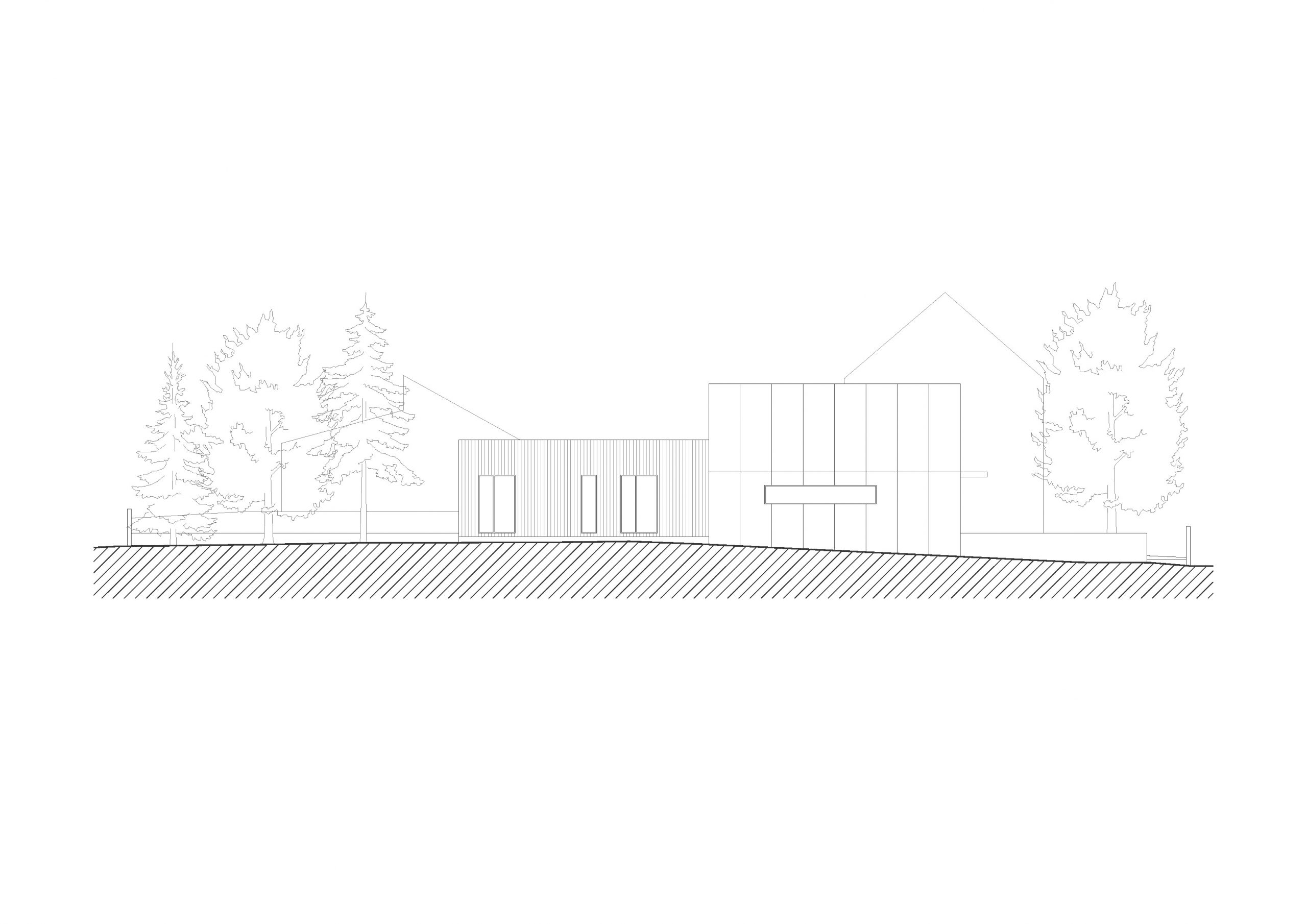 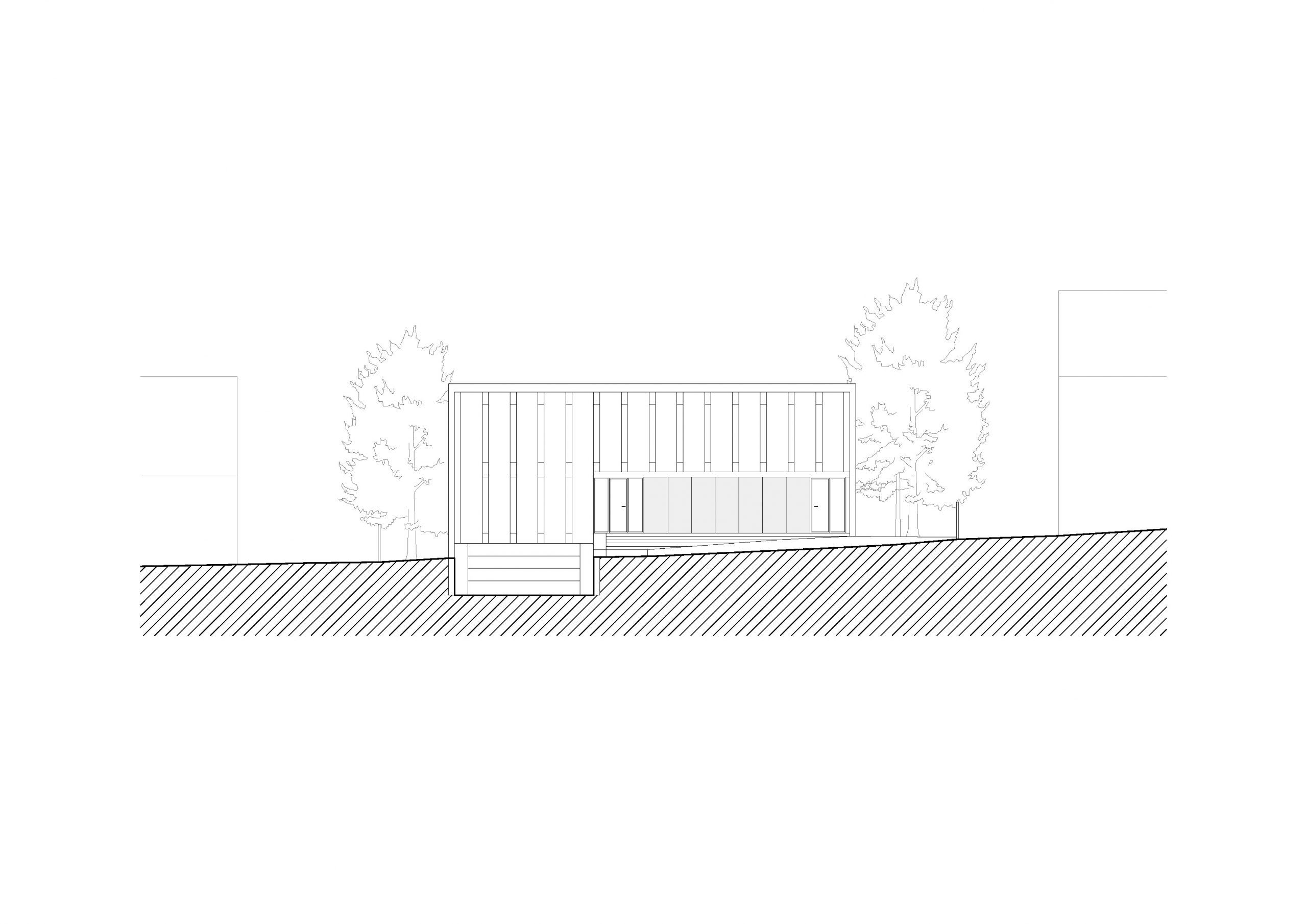