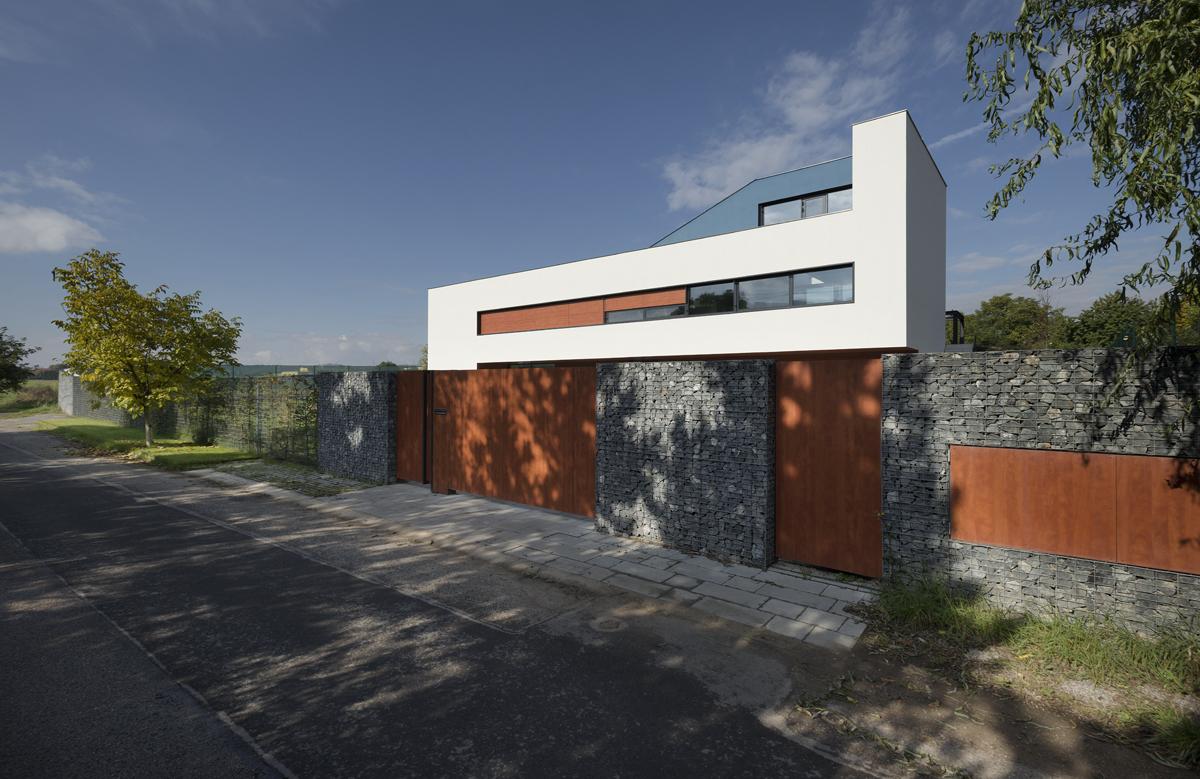 The plot is situated in an area in a long-term and somewhat heterogeneously built-up with single-family houses. It is part of a gap site between two formerly separate communities whose greater part has already intergrown in the valley of the river Berounka into a suburban residential-recreational agglomeration. In the remaining area, we accepted these rules of the game applied in this environment where each build is concerned just with itself.

The position of the house on the plot is, therefore, a result of searching for the optimal balance between the structural height of the first (service, uninhabited) storey and the new earth fills in its north-west side. The crucial factor for this design is the position of the plot in a broader inundation area of the river Berounka. The floor of the habitable storey had to be placed three meters above the current ground. The newly designed landscaping in the north-west part of the site allowed, under these conditions, that one of the main benefits of living in a home, and that is a direct contact of the interior and its inhabitants with the garden, was not lost. We understand it not as an addition but part of a designed living environment, although we will have to wait for some time before the planted vegetation fully displays its charm the same as the houseplants – the conservatory and pots for climbers along the staircase are an integral part of the house.

The earth-fills designed into the garden reach as high as the first living floor – the site formerly sloping to one side was newly moulded this way allowing variable use. The flat part in front of the living room is an outdoor family area with a pergola and an outdoor kitchen for cooking on warm days. The deck loosely passes to the part in front of the outdoor swimming pool sunken into the mound’s body. A narrow outdoor terrace allowing access to the garden from each room runs in front of bedrooms covered by the plantation. Linked slope with retaining walls cutting into it and paths are used to have a fireplace and a gazebo here. The garden in front of the entry to the house respects the original terrain and the level flush with the adjacent road. The house is positioned along the road, and this arrangement allows views from the living storey to the Berounka valley and bordering Hřebeny and Český Kras (hills) from both sides.

The design of the interior layout builds on the before-mentioned premises – the relation to the garden and possible views to the horizons of the surrounding landscape formed vistas through the house and, at the same time, brought more daylight into all places in its living areas. The first storey on the ground level contains the entry hall, service rooms, storage rooms, and a garage for two cars. The western part accommodates a small fitness with a conservatory and own amenities.

The second storey above the Q1000 level (a thousand-year flood) is entirely allocated for the living – a family area of the living room, dining room and the kitchen are accessed via a staircase from the entry hall on the ground floor; this part is connected to the bedroom wing with necessary amenities. As high as this floor is located technical equipment of the house (again due to possible floods) in a separate technical room. We placed a study with own outdoor terrace on a separated platform above the living room.

The internal levels are arranged based on their hierarchy and are, at the same time, modelled to provide an appropriate form of representation to this type of housing: we considered the rate of individuality and related possibility of experimenting very seriously at the beginning of our work. Perhaps also because single-family houses are not quite common among our jobs; we were attracted by this form but, in the end, evaluated it as inappropriate for the given case and tried to design “only” a fair house in the spirit of modern Czech architecture instead, functional and fully equipped to the up-to-date standard.

A reinforced concrete cast in-situ frame (the technology was again selected due to the possible flooding and, at the same time, allowed looser shaping of its form) is white-plastered, doors and windows are aluminium profiles with clear glass and fitted with exterior blinds. Facades are completed with timber panel inlays or accentuated by colours. The same materials and colours are used in the interior. Internal fitout and furniture are custom made.

The house is equipped with a gas boiler, underfloor heating solar collectors, and living areas are air-conditioned. The house system is also prepared to be connected to heat pumps whose drills can be carried out separately in the future. 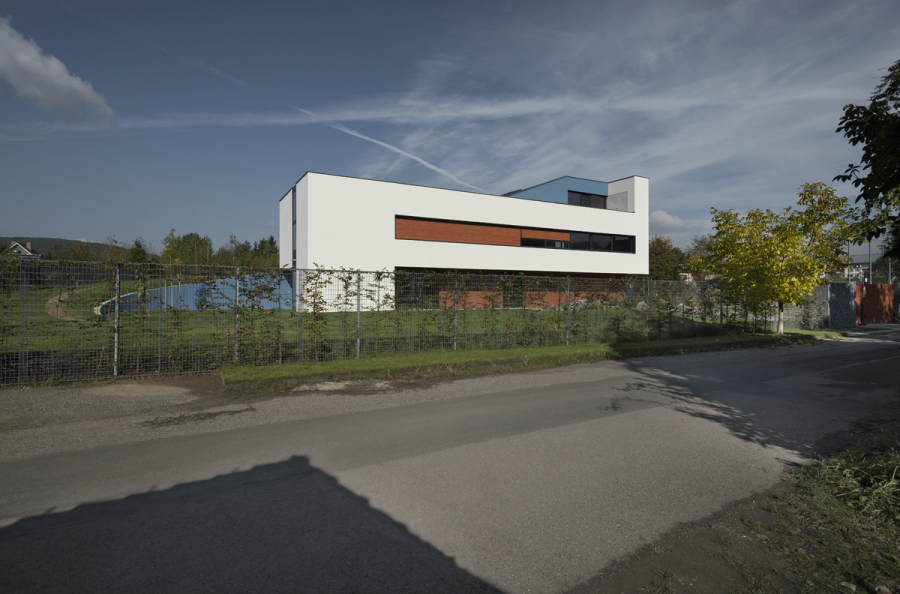 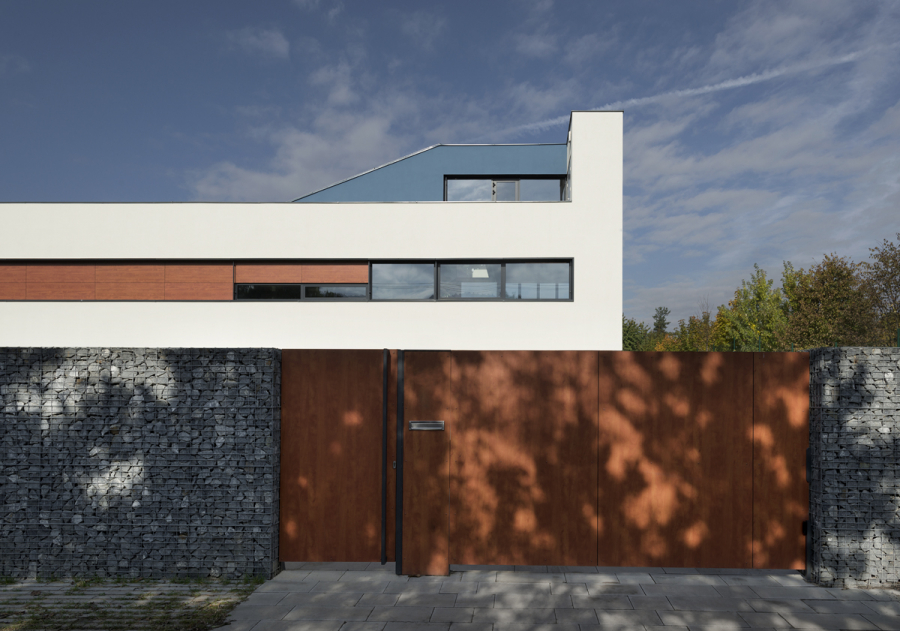 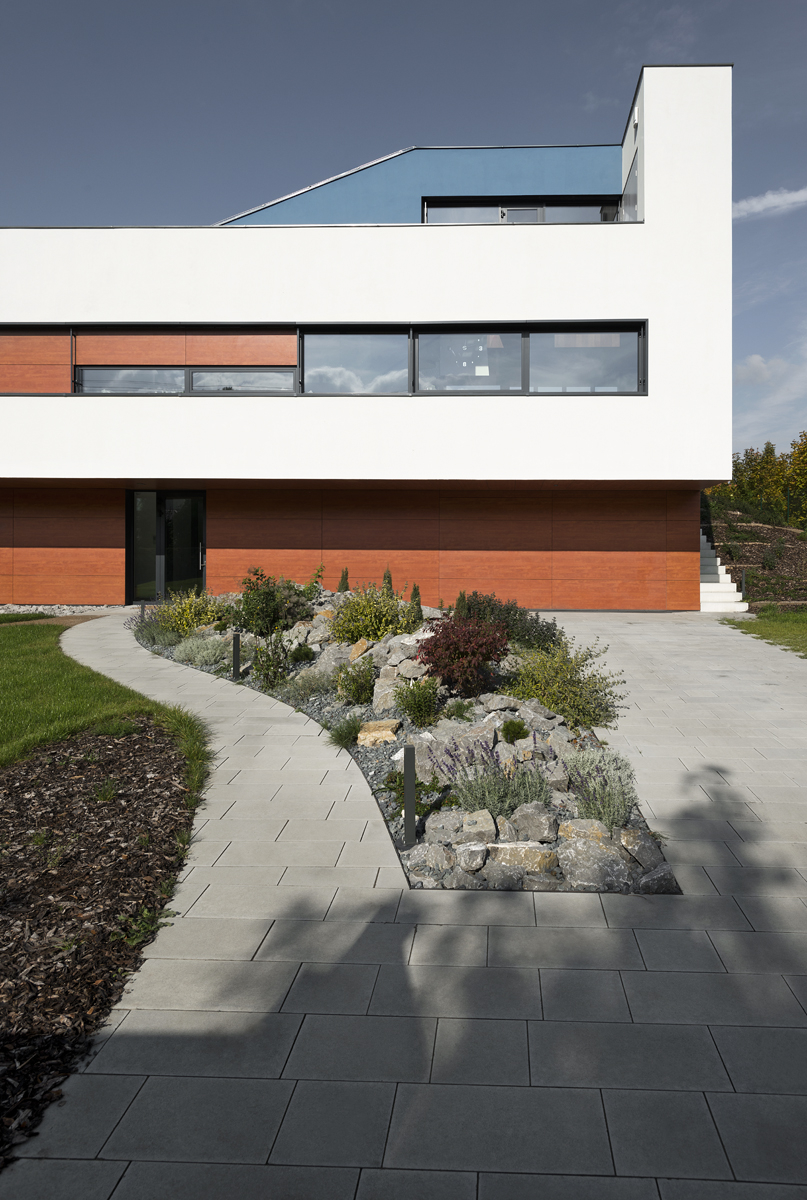 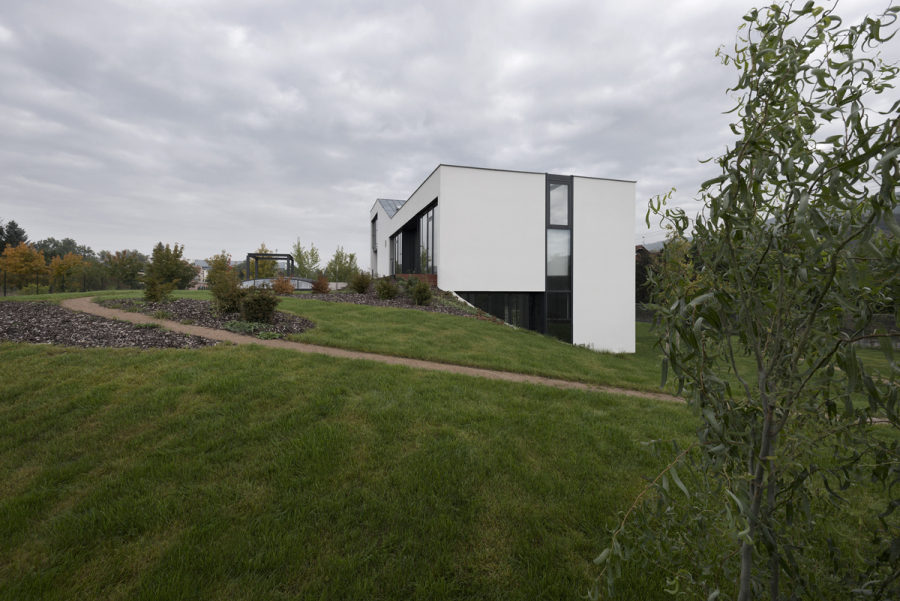